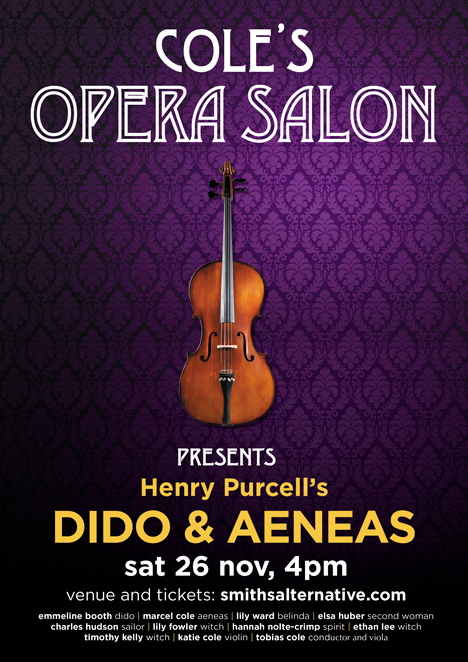 Be transported in Cole's Opera Salon to another world where beautiful music accompanies the battles between love and fate.

Tobias Cole has assembled a young cast of ANU music graduates whose stars are rising.

Recently, they shone in the opera Victory over the Sun with Sydney Chamber Opera at the National Gallery of Australia and, earlier in the year, the program of ‘Voices of London’ in the National Portrait Gallery was a huge hit. A month ago, Emmeline Booth (Dido) and Lily Ward (Belinda) were finalists in the Whitworth Roach performers competition, with Lily taking home the top prize. Both these singers will be leaving Canberra shortly to further their studies so don’t miss this opportunity to hear them before they go.

Since 2007 Cole has been an integral part of the Canberra arts scene. He has directed and established numerous choirs (including CSO Messiah Choir, ANU Chamber Choir, Vocal Fry and Canberra Children’s Choir), performed as a soloist and ensemble singer (Evensong with Clarion), acted in plays (Cold Light at The Street) and produced and directed operas (Handel in the Theatre). Cole has had a long association with Dido and Aeneas having first performed it 28 years ago in London’s Southbank Centre with the Royal College of Music.