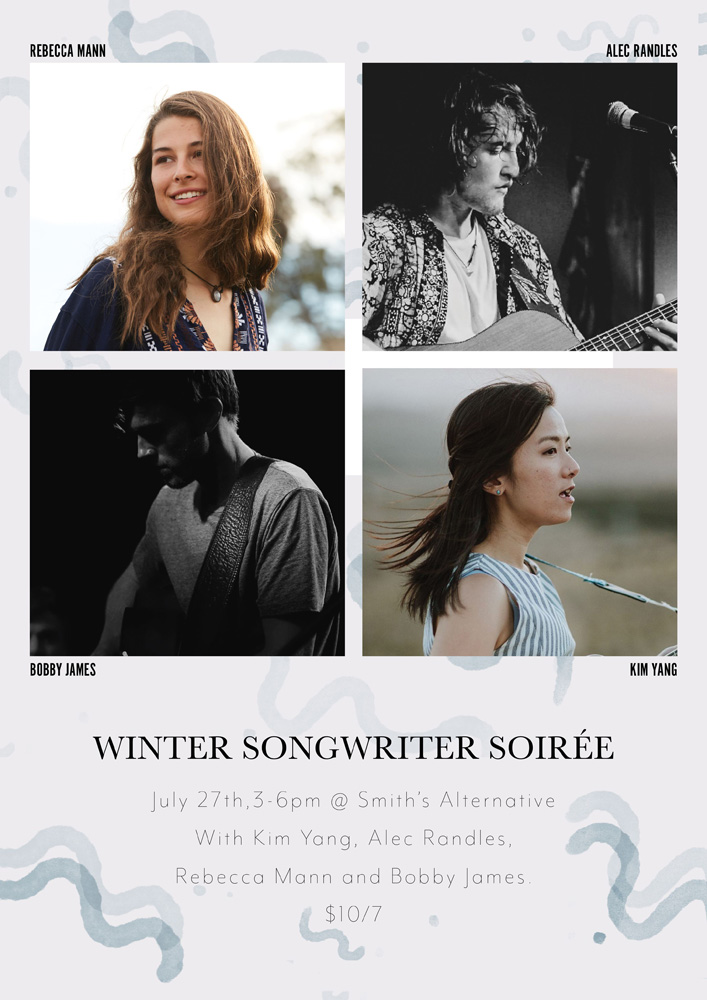 As a part of her Winter East-Coast tour, ex-Canberran singer/songwriter Rebecca Mann has decided to get together a bunch of her favourite local musicians for an afternoon of lovely original music. Featuring Kim Yang, Alec Randles and Bobby James.

Is there a better way to stave off the blue winter chill than to snuggle up with a hot chocolate and listen to a bunch of sappy songwriters pour their hearts out? I don’t think so.

As a part of her Winter East-Coast tour, ex-Canberran singer/songwriter Rebecca Mann has decided to get together a bunch of her favourite local musicians for an afternoon of original local music. Catch Kim Yang, Alec Randles, Rebecca Mann and Bobby James as they serenade you with their finger picking, beautiful melodies and songs about love and loss. It’s a musical get-together not to be missed (and Rebecca’s 25th birthday!)

Alec Randles is an accomplished fingerstyle guitarist and roots songwriter whose guitar work has seen him share a stage with renowned guitarists, such as the 3x Golden Guitar Winner Michael Fix and Alejandro Florez. Alec’s original music has been featured on Triple J and has seen him play gigs and festivals across Australia and the US.

Kim is an acoustic songstress and an aspiring songwriter. Her soothing finger-picking and ethereal voice capture the attention of passers-by. Born in Taiwan, Kim started her Australian music journey in 2016 with a ukulele and a guitar in the streets and cafes of Canberra. Kim’s original songs speak from her lived experiences as a daughter, a traveller, a partner, a friend and an insecure soul with mixed genres of folk, pop, blues and jazz.

Kim is releasing her debut EP ‘Ocean of Mind’ in May 2019, produced by Guyy Lilleyman at Amberly Studios, Canberra. This EP features 3 melodious and emotional songs about love, hope and loss that are very close to her heart.

Rebecca Mann is a singer/songwriter who delivers raw, emotional and passionate original music. Rebecca relishes playing intimate shows around Australia with her empathic, heart-felt music drawing in the audience, on occasion moving them to tears.

Rebecca’s intimate storytelling and ability to share emotion through her performances has earned her a loyal following who relished the release of her debut EP ‘Moon’ (2018). Her music provides a unique look into the human heart and will definitely make you feel.