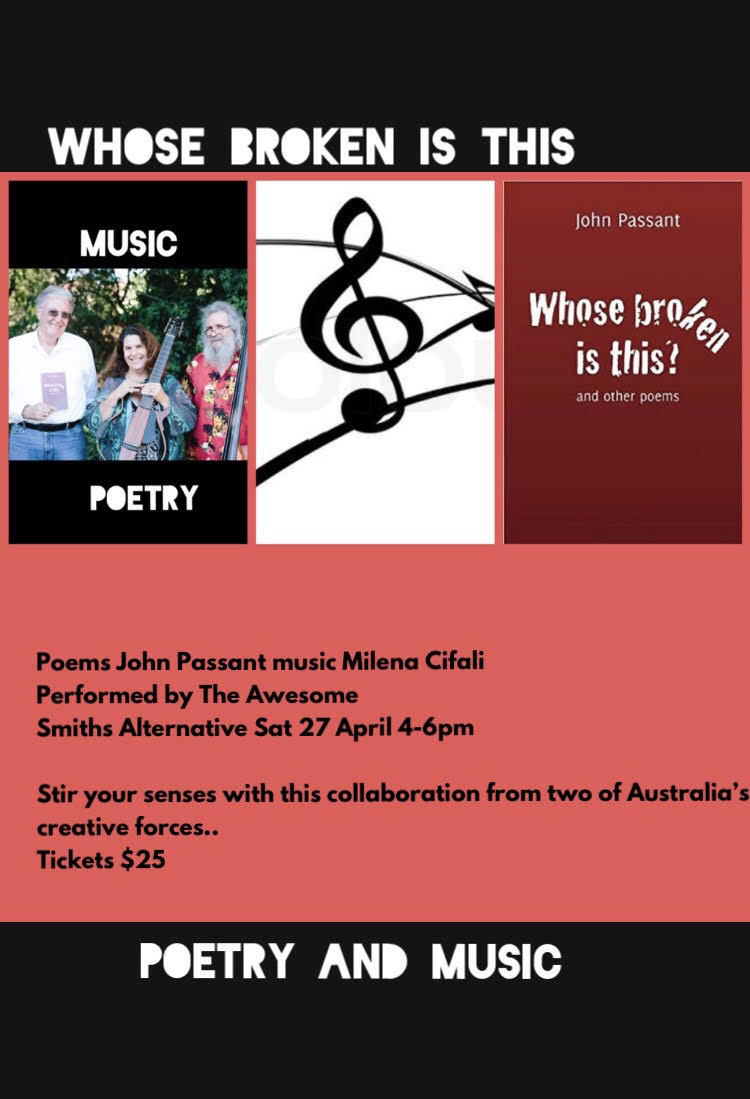 Whose Broken is This?
poetry and music merge..

Two of Australia's highly-regarded creative talents have joined forces to collaborate on a unique album of songs, Whose Broken Is This?

Two of Australia’s highly-regarded creative talents have joined forces to collaborate on a unique album of songs, Whose Broken Is This?

Poet John Passant, who is currently receiving treatment for cancer, has collaborated with acclaimed singer/songwriter Milena ‘Mili’ Cifali to set John’s poetry to music, with an album incorporating a number of readings by him.

The poems are from John’s published volumes, Whose Broken Is This and Other Poems (Ginninderra Press 2018).

Canberra-based John is a poet as well as a journalist, member of the Canberra Press Gallery for Independent Australia, retired senior tax officer, and tax academic and blogger.

The hauntingly beautiful songs are performed on the album by duo The Awesome (Milena on guitar and vocals, Jim Horvath on bass and percussion), with special guest musicians. Hailing from far-east Gippsland in Victoria, The Awesome are self-described ‘musical gypsies’ who travel and perform constantly around the country, including at the 2018 National Folk Festival.

Classically-trained Milena is a guitarist of rare talent, enchanting audiences with her uniquely intricate style that fuses elements of John Butler, Rodriguez and Michael Hedges. She has released several CDs of original music highlighting her love of folk/jazz fusion and her impressive interpretive range.

Jim Horvath, playing distinctive upright bass, is also a talented percussionist with a flair for African, Latin/Jazz/Blues rhythms, having learnt his craft from the legendary Stui Spears of Max Merritt and the Meteors, and through performing with unforgettable blues band Chain.

Milena says: “John’s poetry is a vital body of work for Australian poetry; at once thought-provoking, sensitive, brutal, honest and always hopeful. The poems shake and stir the dust in your soul, remaining there long after the dust has settled.”