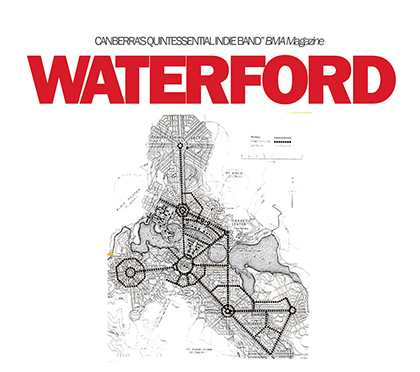 ‘Canberra’s quintessential indie band’ (BMA Magazine) have given up on predicting when their sophomore record will be released. “We’re working, intermittently, as we have been since 2012” says songwriter and primary road-block Glen Martin, “but given that we’ve been telling people that it’s imminent since late 2014, we best stay quiet until it’s done.”

What Waterford can say is that a new single is complete, and will be released digitally on April 1. “No joke. No fooling. A real, actual slice of three minute pop music will be shot into the digital ether” say Martin.

The single, Libra II (Who Must be Obeid) is the first track since the 2014 release of their barnstorming Triple J approved tune All That Gold. “This is a tune which represents the more upbeat end of the record” says Martin. “To us it sounds like a fusion of some favourite acts put through our filter- Teenage Fanclub playing a Bats song, maybe with members of R.E.M. circa 1984 sitting in the session. Lyrically it imagines the corroding power of ill-gotten gain, something I was thinking about as we witnessed the comical collapse of the Obeid family. Money and power. Ugly stuff”

Waterford are an indie-rock band in the best sense of the term. Over time they’ve become a formidable live act, their performances described by Faster Louder as ‘flawless’. They’ve toured the eastern seaboard and supported luminaries including Stephen Malkmus & the Jicks, Crayon Fields, Monnone Alone, Dave Graney, Jamie Hutchings, Oh Mercy, The Zebras, Bored Nothing, Last Leaves, Aleks and the Ramps, The Cannanes, Kim Salmon and Stephen Cummings.

In 2012 The Sydney Morning Herald’s Dave Ruby-Howe named Waterford as a ‘band to watch’ amongst the next wave of Australian artists, and that year the band was nominated for best Rock/Alternative artist at the inaugural MAMAs (MusicACT Music Awards).

Since then the band has been crafting a follow up LP, culling two versions and whittling over 50 songs into the final 10, which will see the light of day… sometime soonish.