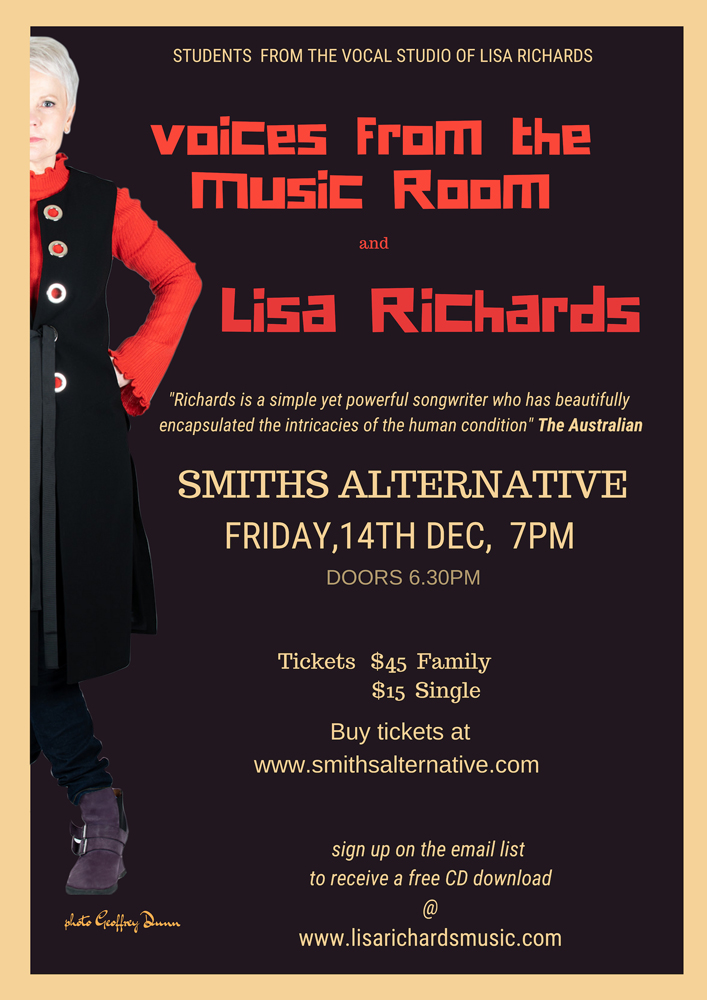 Voices From the Music Room
with Lisa Richards

Singer-Songwriter and voice teacher Lisa Richards presents Voices from the Music Room showcasing the talent of her students, followed by a solo Lisa Richards performance.

It's the end of the year concert! Singer-Songwriter and voice teacher Lisa Richards presents “Voices from the Music Room” showcasing the talent of her students, on Friday December 14th at Smith’s Alternative.

Following the student showcase, there will be a solo Lisa Richards performance.

Lisa's songs have appeared on CD's alongside Adele, Nina Simone and Corinne Bailey Rae as well as being heard in film and television. An Independent artist, she has released and toured 6 albums internationally. Her critically acclaimed 6th CD, "A Light From The Other Side" was recorded and produced in Australia by Greg J Walker ( Paul Kelly, Tiny Ruins, CW Stoneking) She returned home to Australia after falling in love and now lives in our nation's capital.

"commanding and confident. It makes for truly stimulating listening...Richards is a simple yet powerful songwriter who has beautifully encapsulated the intricacies of the human condition." – Emily Ritchie, The Australian

"A powerful story is invaluable to successful song writing and this is none more evident than in ‘A Light From the Other Side’. Within its confines lies heartfelt emotion combined with exemplary musicianship which creates a truly stunning piece of narrative art." – Rhythms Magazine