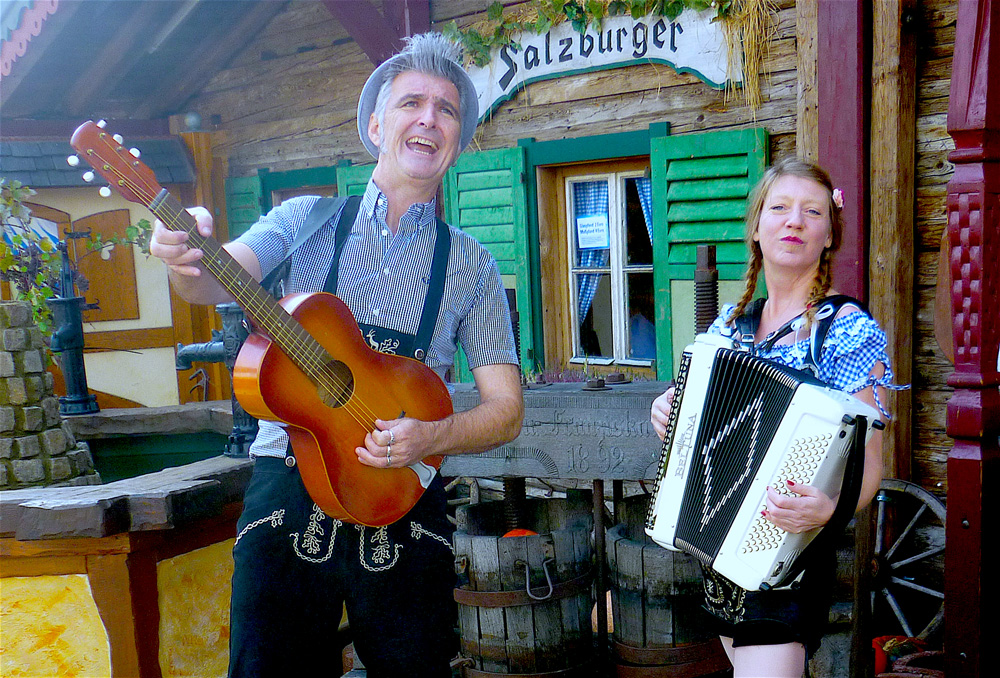 The Sauerkrauts
The Beez' Deta and Rob

The Beez' Deta and Rob Rayner present a yodellin', thigh slappin', lederhosen wettin' fest of German dance polka from Rammstein to Kraftwerk and beyond.

Deta and Rob Rayner from The Beez present:

A yodellin´, thigh slappin’, lederhosen wettin´  fest of German music from The Beez´ Deta  (accordion,vocals) and Rob (guitar, vocals) and featuring the Beatific Beats of  their Bavarian Boombox. You´ll thrill to comic classics from the likes of Rammstein and Kraftwerk; you´ll tear off that dirndl and shake a Teutonic Tailfeather when you catch a glimpse of Nena´s 99 Red Balloons; you´ll swoon to Marlene Dietrich´s Lili Marlene but, most of all, you´ll be entertained – and that´s an order!

Deta and Rob always felt that the German Oeuvre was a little under represented in The Beez, so here they are to make amends with an evening of dancefloor compatible Deutsche Derring-do, featuring Deta´s fabulous “Brunhilde Bass” accordion . One octave below the conventional accordion bass, this is an Alp-quaking  tone of Wagnerian proportions. Melded with Rob´s custom Höfner “Blitzkrieg” guitar, it´s an irresistable rockin´ polka machine held together by the marching rhythms of a loop machine by the name of Wolfgang Amadeus and, of course, those gorgeous harmonies and cabaret sensibilties which are the icing on the Schwarwälderkirschtorte.

Deta and Rob both hail from Berlin; their band The Beez performs regularly throughout Europe and Australia. They´ve appeared on ABC TV´s Spicks and Specks and at just about every  folk festival you care to think of.