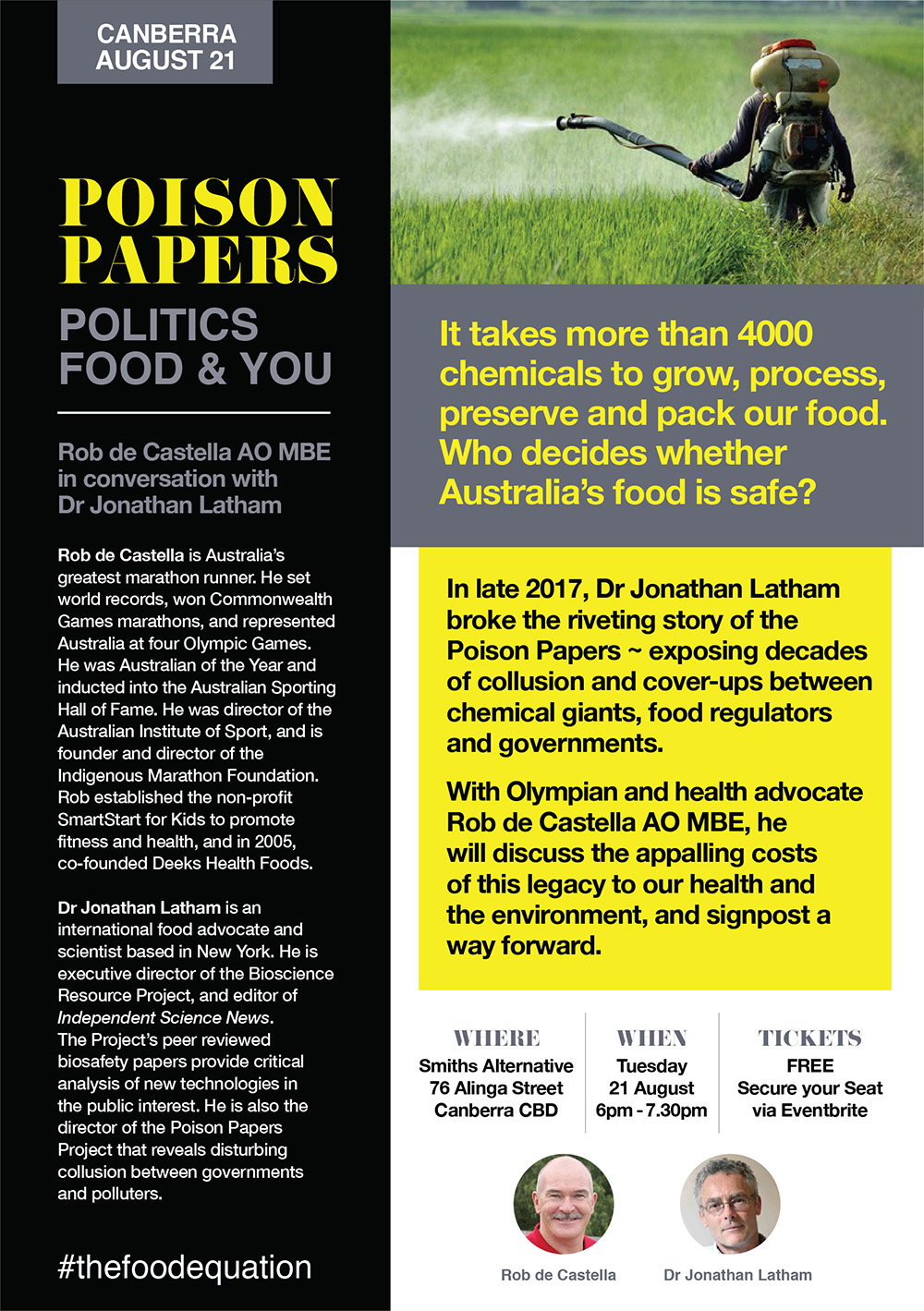 The Poison Papers
Politics, Food and You

Rob de Castella [Deeks] is Australia’s greatest ever marathon runner. He set world records, wonCommonwealth Games marathons, and represented Australia at four Olympic Games. He was awarded Australian of the Year, honoured with an MBE, and inducted into the Australian Sporting Hall of Fame. He has been Director of the Australian Institute of Sport, and established the non-profit SmartStart for Kidsto promote fitness and health. He is currently foubder and director of the Indigenous Marathon Foundation. In 2005 Rob co-founded the award-winning Deeks Health Foods, focusing on grain-free and Paleo foods. He says: ‘Higher crop yields, more disease and pest resistance, longer shelf life, and artificial flavours and colours are in conflict with food and farming systems that mankind has evolved and thrived on for millennia.’

Dr Jonathan Latham is an international food advocate and scientist based in New York. He is executive director of the Bioscience Resource Project, and editor of Independent Science News. The Project’s peer reviewed biosafety papers provide critical analysis of new technologies in the public interest. He is also the director of the Poison Papers Project that reveals extraordinary collusion between governments and polluters. Dr Latham is author of scientific papers in diverse disciplines as virology, ecology, genetics, genetic engineering and molecular biology. He talks frequently at scientific and regulatory conferences, and has written for Truthout, Salon, MIT Technology Review, Resilience and The Guardian.

THE POISON PAPERS represent a vast trove of rediscovered chemical industry and regulatory agency documents and correspondence stretching back to the 1920s. Taken as a whole, the papers show that both industry and regulators understood the extraordinary toxicity of many chemical products and worked together to conceal this information from the public and the press. These papers will transform our understanding of the hazards posed by certain chemicals on the market and the fraudulence of some of the regulatory processes relied upon to protect human health and the environment.

The Poison Papers are a compilation of over 20,000 documents obtained from federal agencies and chemical manufacturers via open records requests and public interest litigation. They include internal scientific studies and summaries of studies, internal memos and reports, meeting minutes, strategic discussions, and sworn testimonies. The majority of these documents have been scanned and digitised for the first time and represent nearly three tons of material.

The Poison Papers is a project of the Bioscience Resource Project and the Center for Media and Democracy, and were largely collected by author and activist Carol Van Strum. The Poison Papers catalogue both the secret concerns of industry and regulators over the hazards of pesticides and other chemicals, and their efforts to conceal those concerns.

Corporate concealment is not a new story. What is novel in the Poison Papers is abundant evidence that EPA and other regulators were, often, knowing participants or even primary instigators of these cover-ups. These regulators failed to inform the public of the hazards of dioxins and other chemicals; of evidence of fraudulent independent testing; even of one instance of widespread human exposure. The papers thus reveal, in the often-incriminating words of the participants themselves, an elaborate universe of deception and deceit surrounding many pesticides and synthetic chemicals.

The chemicals most often discussed in the documents include herbicides and pesticides (such as 2,4-D, Dicamba, Permethrin, Atrazine, and Agent Orange), dioxins, and PCBs. Some of these chemicals are among the most toxic and persistent ever manufactured. Except for PCBs, almost every chemical discussed in the Poison Papers is still manufactured and sold today, either as products or as product contaminants.

Recent research from Australia, shows that many newly-synthesized chlorinated chemical products, including the herbicide 2,4-D, remain contaminated with dioxins. Notably, 2,4-D has just been authorized by EPA for use on Dow’s new GMO 2,4-D-tolerant soybeans. Some of the 20,000+ documents in this repository have surfaced over the years. Many have never been either read or publicly written about. The Poison Papers therefore offer a unique opportunity for researchers, the public and the media to discover much more about what was known about chemical toxicity, when, and by whom.

Secrecy— They disclose EPA meeting minutes of a secret high level dioxins working group that admitted dioxins are extraordinarily poisonous chemicals. The internal minutes contradict the Agency’s longstanding refusal to regulate dioxins or set legal limits.
Collusion— They demonstrate EPA collusion with the pulp and paper industry to “suppress, modify, or delay” the results of the congressionally-mandated National Dioxin Study, which found high levels of dioxins in everyday products, such as baby diapers and coffee filters, as well as pulp and paper mill effluents.
Deception— They provide important new data on the infamous Industrial Bio-Test (IBT) scandal. By the late 1970s, it was known that more than 800 safety studies performed by IBT on 140 chemicals produced by 38 chemical manufacturers were nonexistent, fraudulent, or invalid. The Poison Papers, however, show that EPA and its Canadian counterpart, the Health Protection Branch (HPB), colluded with pesticide manufacturers, to keep invalidly registered products on the market and covered up problems with many IBT tests.
Cover-up— The papers also show that EPA staff had evidence that this IBT scandal involved more independent testing companies and more products than ever officially acknowledged. Concealment— The papers show that EPA concealed and falsely discredited its own studies finding high levels of dioxin — 2,3,7,8-TCDD — in environmental samples and human breast milk following routine use of 2,4-D and 2,4,5-T (Agent Orange) by the federal Forest Service and Bureau of Land Management.
Intent— They show Monsanto chief medical officer George Roush admitted under oath to knowing that Monsanto studies into the health effects of dioxins on workers were written up untruthfully for the scientific literature such as to obscure health effects. These fraudulent studies were heavily relied upon by EPA to avoid regulating dioxin. They also were relied upon to defend manufacturers in lawsuits brought by veterans claiming damages from exposure to Agent Orange.