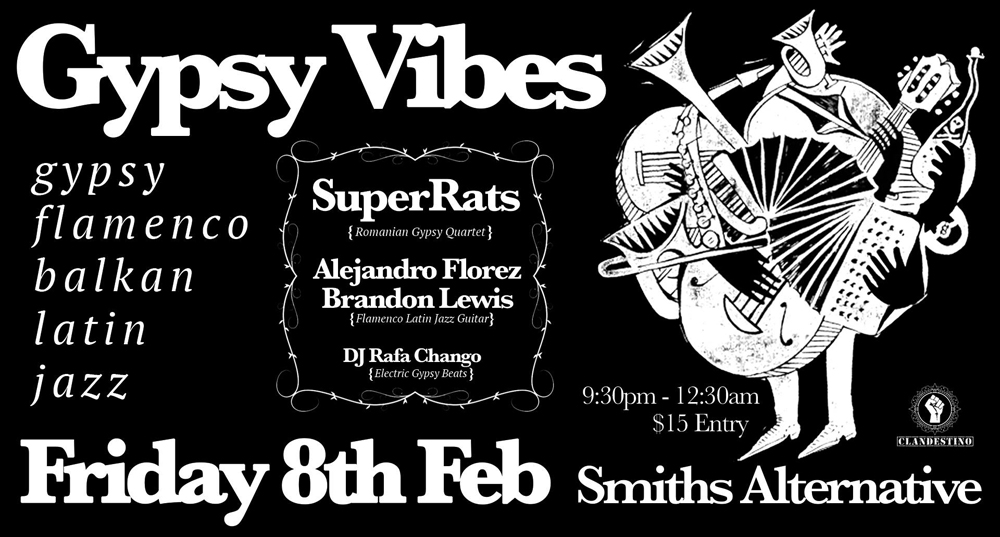 A unique night of LIVE music and vibes showcasing the breadth of Gypsy music from traditional folkloric Romanian sounds from old Bucharest to the Flamenco Latin Jazz atmosphere created by two guitars and beyond!

Alejandro Florez
Melbourne based guitarist with more than 20 years experience playing nationally and internationally. Alejandro's two studio albums consist of original compositions with influences from the music of both Spain and Latin America and multicultural collaborations; referencing typical flamenco forms and rhythms. Recently, Alejandro has returned to his inspiration to first pick up the guitar, Flamenco, accompanying singing and dancing.

Brandon Lewis
Originally from Perth Western Australia, Brandon started playing the guitar at 15 years of age and after attending the Victorian College of the Arts in 1995 he joined the Latin/jazz group Ocaso who toured extensively through Australia.
Over his 25 years of professional playing he has released 8 cd’s ranging from jazz, Spanish and electronic styles. Artistic, intense, and formidably inventive, Brandon is a performer of genuine distinction.

DJ Rafael Chango
Canberra based cultural producer and presenter of World Vibe - ArtSound FM - Rafael's eclectic tastes and rhythmic obsessions manifested in the early 2000's while peddling home made CDR mixtapes to friends/strangers and his passion for sharing Dope Global Tunes with fellows humans has lead him from those humble beginnings in Belconnen to the Smith's stage tonight (by way of his Los Chavos + Cultura Clandestino familia).