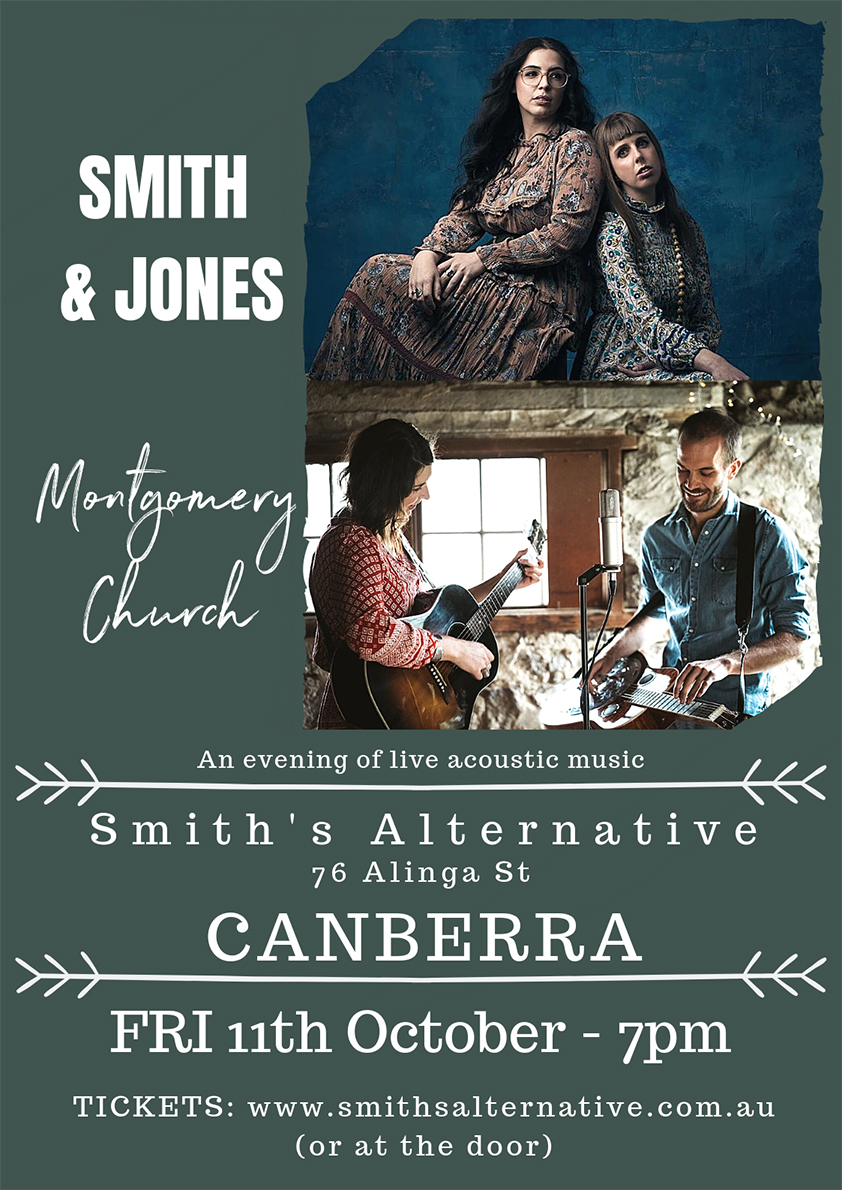 Smith & Jones and Montgomery Church
An evening of acoustic music

Smith & Jones, made up of keyboard player and vocalist Abby Smith, with guitarist and vocalist Sophie Jones, have never been ones to follow the pack. Though classified as alt-country, their goal has never been to remain within the confines of any genre, preferring to let their sound and their songs take them where they will. Nowhere does this desire for individuality shine brighter then on their newly released second album ‘Something Worth Learning’.

Recorded at both Love Hz Studios and Linear Recording in Leichhardt, Sydney and produced by Michael Carpenter, ‘Something Worth Learning’ is still full of the charm and joy audiences have come to expect from Smith & Jones. This new work delicately balances themes of love and loss, friendship and isolation, emotional desire and freedom, fearlessly exploring the depths of their musical partnership with the listener by their side.

Smith & Jones’ first album, ‘Dark Gives Way’, released in 2017, was extremely well received with its first three singles; ‘Baby Blue’, ‘Small Town Woman’ and ‘Your Achin’ Heart’, all went to number one on the internet’s Australian Country Radio charts and received airplay around the country.

“They’ve taken the path of making music that they want to hear themselves, whether it’s the catchy pop sounds as heard on the first single SecondHand Heart or Running from Something. A slice of fun with a bit of walking bass and finger snapping, singing a love letter to the “Boss” which was written after seeing him in concert: Last Night I saw Jesus. Then there’s beautiful piano ballads ”One Last Time” and “In The Middle of the Night” which could have easily echoed out around Laurel Canyon in the early ‘70s.” – Pat Coomey

Cielle Montgomery and James Church are ‘Montgomery Church’ - a blend of acoustic folk, americana and bluegrass influences, grown and distilled in the Snowy Mountain ranges of country New South Wales. With their organic union of dobro and guitar, harmony vocals, and thoughtful songwriting, this captivating duo are enthralling in their dynamic intimacy and embrace all that is subtle, spacious, and sensitive.

Since their formation in 2016, Montgomery Church have been quietly but quickly gathering a fan base who site their undeniable chemistry as a rare and beautiful thing to see live.

…."I’m a big fan of great songs and great singers, but it’s the sheer authenticity here that really speaks to me - the honesty is powerful and the sweetness sublime.”.... - Shane Nicholson (ARIA and Golden Guitar Award Winning Artist)

Their highly anticipated new album "In the Shadow of the Mountain”, which earned them 2 nominations in the prestigious 2019 Golden Guitar Awards, is the duo's first collective offering. An 11 track summary of their unique qualities and that special intangible ‘something’ that all the great duos possess. A sort of ‘alignment’ that speaks a greater volume than the sum of their parts. “Our goal was to create something ‘honest’ that sounded just like us. We want the listener to feel like they’re at a live show or sitting in our lounge room at home when they hear the album” says Cielle.

…”Montgomery Church are like the Australian version of Gillian Welch and Dave Rawlings but if Gillian was the daughter of Allison Krauss...sitting on a porch, with tea not whiskey...I'm a tad obsessed...The most graceful duo literally gracing stages right now." … - Fanny Lumsden (Golden Guitar Award Winner & ARIA Award Nominee)