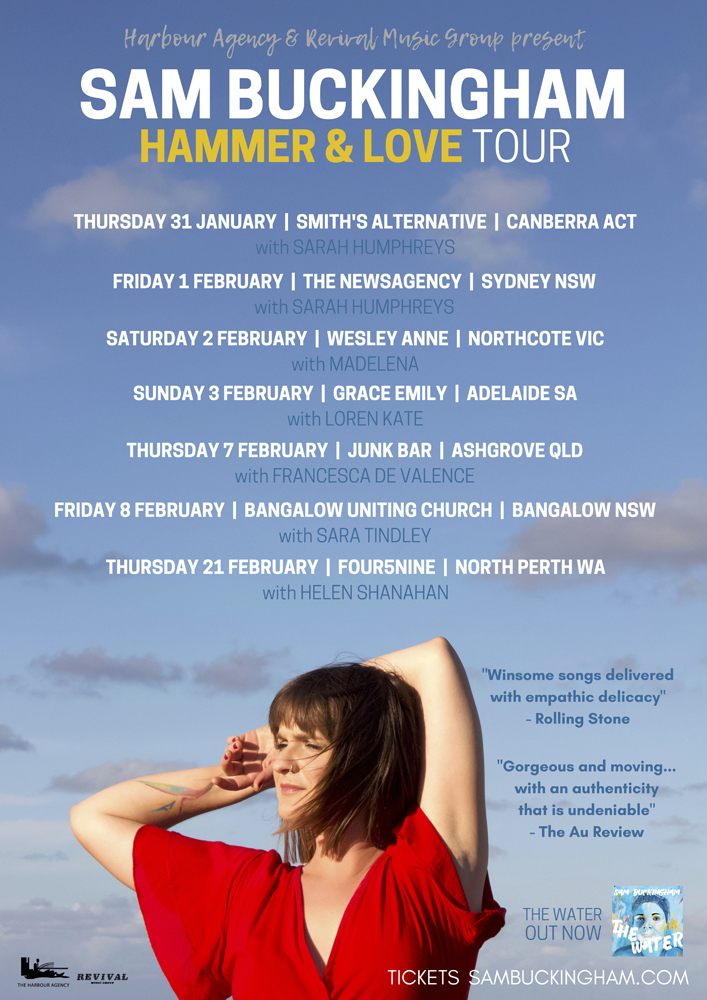 Singer-songwriter sweetheart SAM BUCKINGHAM announces her long awaited run of national dates, touring for the first time with her band. Buckingham will perform album 'The Water' in it's entirety and a swag of stunning new songs.

“Winsome songs delivered with empathic delicacy” – ROLLING STONE
"Gorgeous and moving... with an authenticity that is undeniable" – THE AU REVIEW
“A breath of fresh air” – MUSIC LOVE
“Truly gorgeous... an album full of truth and strength” – SYDNEY MORNING HERALD
"Compelling, beautiful... she'll take you on a journey home" – THE MUSIC

Singer-songwriter sweetheart SAM BUCKINGHAM announces her long awaited run of national dates, touring for the first time with her band. Bringing her trademark intimate live show to Brisbane, Bangalow, Sydney, Canberra, Melbourne, Adelaide & Perth, Buckingham will perform her acclaimed 2017 album ‘The Water’ in its entirety and premier a swag of stunning new songs, earmarked for recording later in the year.

Recorded over just one week in a converted horse stable on the NSW south coast, ‘The Water’ has seen Buckingham tour alongside Kasey Chambers, James Reyne, Jordie Lane and Diesel, showcase at Nashville’s renowned Americanafest and embark on three sold out national solo tours of her own.

An audio journal of sorts, Buckingham penned the majority of the album while living in Latin America. An account of her 18 months abroad - which included working on a permaculture farm in Costa Rica, volunteering with Sea Shepherd in Honduras and completing formal yoga teacher training in Mexico - ‘The Water’ combines subtle rhythms and the emotive language of Latin America with fragile folk music, rousing Americana and pop inflected hooks.

Hammer and Love was one of the first songs penned for the album, inspired by three months working at The Yoga Farm, a sustainable living project in Costa Rica. “I was living in a small community, with only the basics, moving my body the majority of the day, waking up and going to sleep with the sun. I was the happiest and healthiest I’d ever been.” Buckingham recalls. “That time showed me that keeping things simple, prioritising your mental and physical health and being grateful for what you’ve got are the pillars to living a good life - I try to remember that always”.

Australian folk sweetheart Sarah Humphreys returns with her third studio album, New Moon - recorded live over four days in a studio on a foggy mountain with some of Australia's finest musicians and produced by Kasey Chambers. It is a record that whilst being written, helped Sarah find her way back to the light again with honesty and strength.

'From the first time I heard Sarah Humphreys' beautiful voice I became her biggest fan. She writes songs from the heart that are real and captivating - just like the person she is.' – Kasey Chambers