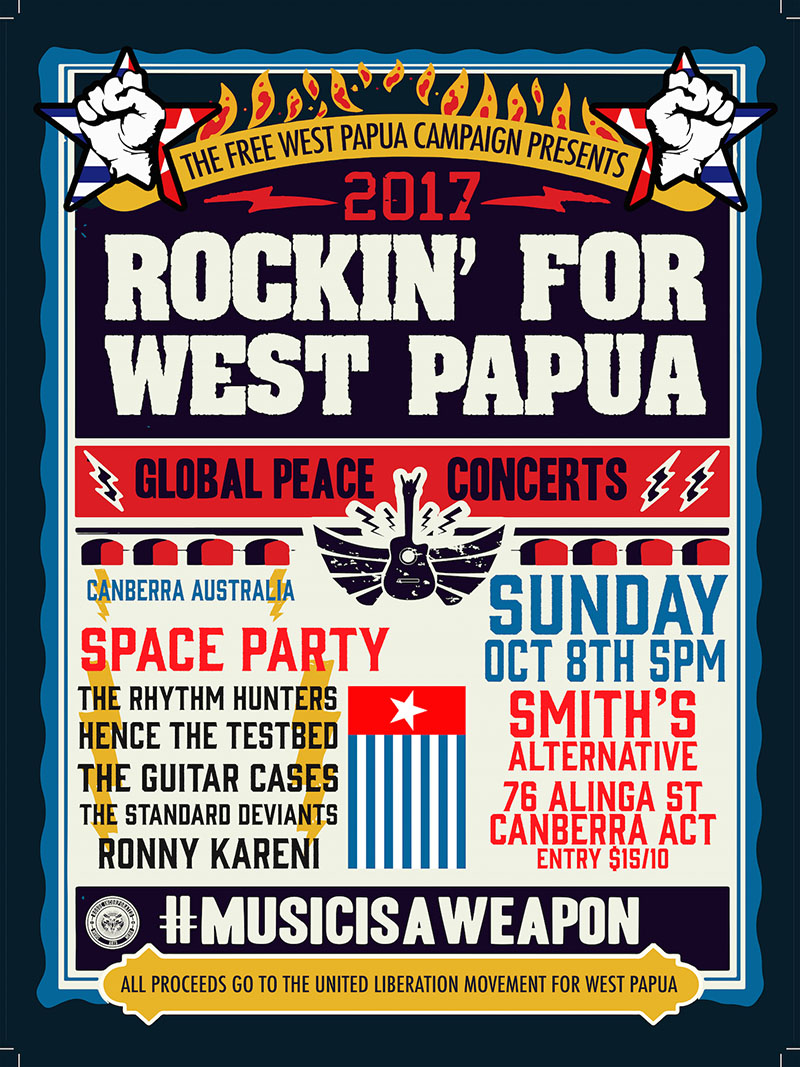 A worldwide music, arts and cultural festival of events raising awareness of the genocide and human rights abuses on the indigenous people of West Papua.

The people of West Papua have been suffering under Indonesian occupation since 1963. Over 500,000 civilians have been killed, and thousands more have been raped, tortured and imprisoned. Foreign media and human rights groups are banned from operating in West Papua, so people rarely hear about the situation there. The Free West Papua Campaign is bringing the story of West Papua to the world and campaigning for freedom and justice in West Papua, to end the violence of the last 50 years.

Following the noise made and the funds raised by the ‘Punks For West Papua’ movement and documentary, more rockin’ artists are coming together for a weekend of live music & arts events around the world to show support and help raise funds to assist the plight of the West Papuans, presented by global music & cultural movement Rize Of The Morning Star.

In Australia ‘Rockin’ For West Papua’ gigs have been announced in Sydney, Melbourne, Brisbane, Darwin, Hobart, Perth, Hobart, Gold Coast, Lismore Central Coast, Canberra, Wollongong, Warnambool, Castlemaine and all corners of the globe.
Plus more to be announced

All funds raised go to the Free West Papua Campaign

R4WP has invited musicians, artists and anybody who wants to make a stand, to show their colours by organising gigs, exhibitions, festivals or any social gathering or display of support to let Indonesia, USA, Australian and UK governments know that we are standing for West Papua.

The latest on West Papua:

Despite the growing global support of the United Liberation Movement For West Papua (ULMWP), even as recently as last week over 800 West Papuan people were arrested and many tortured by Indonesian authorities simply for peacefully calling for full membership of the Melanesian Spearhead Group (MSG). In recent weeks there has been a surge of human rights abuses as thousands of people joined mass rallies with hundreds arrested at passive demonstrations in West Papua and Indonesia. Even with the media ban, harrowing video evidence has emerged of the brutality that peaceful protesters were met with including children and students.