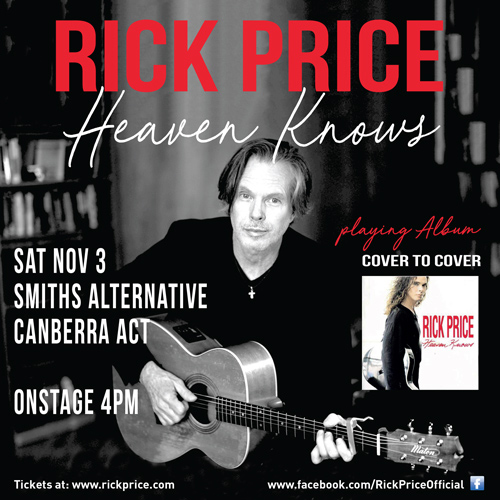 Rick returns to Australia to perform the 1992 'Heaven Knows' album in full, in solo acoustic mode - never before performed this way.

Heaven Knows was first released through Sony Music in July 1992 and spawned five singles, ‘What’s Wrong With That Girl’, ‘Not A Day Goes By’, ‘A House Divided’, ‘Walk Away Renee’ and ‘Heaven Knows’. The Album peaked at #3 in Australia and spent 23 weeks in the ARIA Top 40 charts. The second single and title track ‘Heaven Knows’ charted across Europe and Asia and won the APRA ‘Song Of The Year’ Award.

Now, Rick returns to Australia, from Nashville, to tour ‘Heaven Knows’ in solo acoustic mode, where he will perform the album ‘Cover to Cover’. Rick has never performed the album in its’ entirety before on stage, so these shows are sure to delight the avid fan!

“What a journey it’s been these past 25 years since the release of my Heaven Knows album. I’m excited to announce that I’ll be performing the entire record Cover To Cover on my October/November 2018 tour. Songs transform over a period of time in performance and these early tunes have certainly developed a life of their own. I’m looking forward to revisiting them with you. I hope you’ll join me.”– Rick Price

The last 12 months has been an amazing journey for Rick, releasing ‘California Dreaming’, an album he collaborated with his great friend and colleague Jack Jones, through SONY Music. It shot straight to No. 1 on the ARIA ‘Australian Artist’ Charts and received airplay across the country.

“Price's voice is beautifully melodic. The years since his hits ‘Heaven Knows’ and ‘Not A Day Goes By’, have given his tone greater maturity and lushness while retaining a soaring boyishness. He offers these songs with a fresh touch, they lilt and drift through the audience like saccharine kisses.” – The Music

“When I think of the very best that the Australian music industry has to offer, Rick Price and his debut album are always at the top of my list. While it has been over 25 years since I was first exposed to this exceptional album, I can say with complete honesty that it feels as fresh as the day it was released.”  – Mark Greentree, Subject Sounds

“Whether you’re a seasoned Rick Price attendee or seeing him for the first time, Rick’s honest banter and engaging stage presence has you leaving his gig feeling like you’ve’ know him for years. When it comes to Australian male vocalists and songwriters, Rick Price deserves to be regarded among the very best.” – The Rockpit