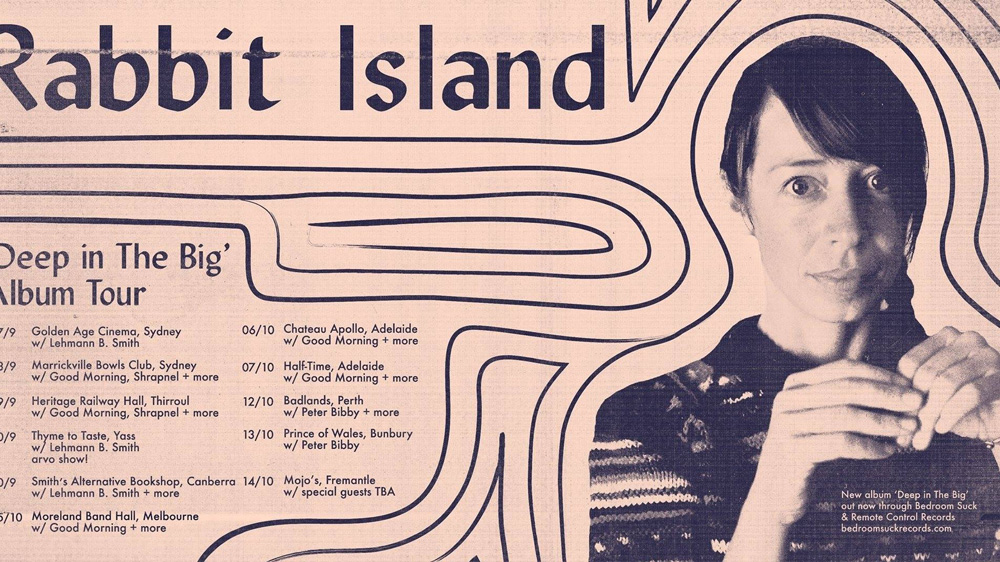 Rabbit Island
with Lehmann B. Smith

Fremantle psych-folk luminary Rabbit Island is taking her new album on tour! Catch her across Australia this September and October. Appearing at Smith's Alternative on Sunday, September 30 w/ Melbourne weirdo-country rocker Lehmann B. Smith (from the incredible Totally Mild), plus special guests.

"Man, Amber Fresh probably has the Holy Grail and keeps it in her sock drawer next to some socks and emergency vegetables. She knows something we don't. As Rabbit Island, it's impossible to imagine her hitting a wrong note, in the same sense you wouldn't expect a native speaker of a language to start talking about golf when you ask them what the time is. She could play these songs with her eyes closed (and she does) because they are extensions of herself; her notes, in her songs, about her world. It's all one rippling, endless surface. People shushed each other. That cover of Push It was worth getting rained on as I went home." Alex Griffin, Xpress

"The beautiful yet intimidating setting meant that you could hear every time that Amber Fresh shuffled her chair across the floor or the false starts to her songs. It is these real moments that make Fresh one of Perth's most enthralling musicians. You may never know exactly what you are going to get, even if you can be sure that Adam's Song and Once I Was are exquisite in any setting". Chris Havercroft, Xpress