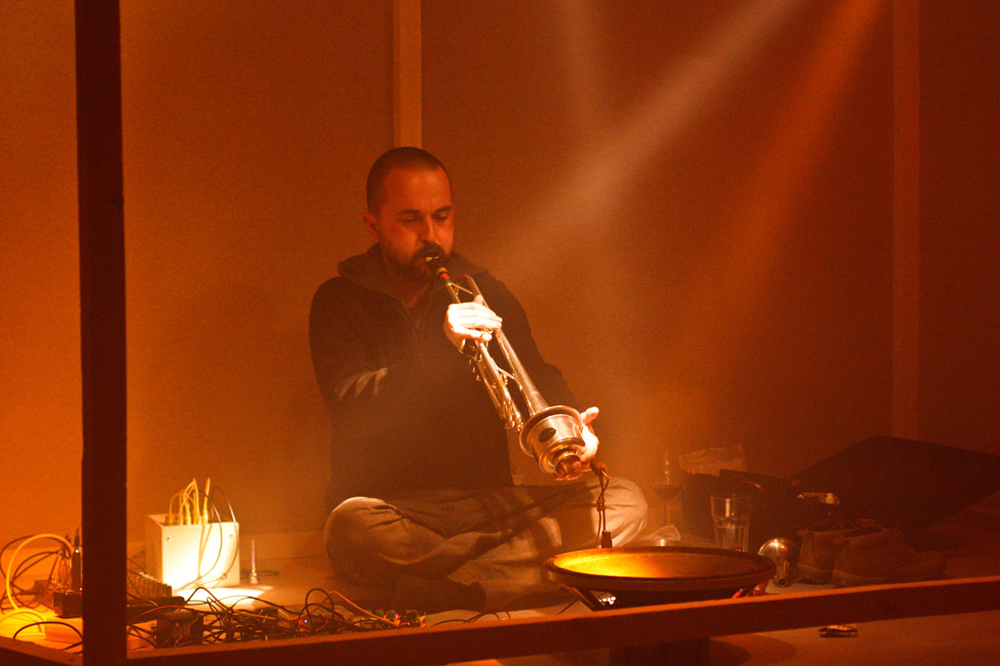 SoundOut Festival kicks things off with a sneak peak at Smith's Alternative featuring one of the Czech Republic's most active experimental musicians, Petr Vrba. Petr will be joined by local improvisors Millie Watson, Rhys Butler and more.

Czech Republic trumpeter Petr Vrba’s unrelenting explorations of non-idiomatic improvisation using trumpets, clarinet, vibrating speakers, egg cutters etc., have made him one of the most active experimental musicians in Prague currently. During the autumn and winter of 2016 he released six albums including ‘Resonators’ (with George Cremaschi and Irene Kepl). Intensive collaboration arose from meeting with American musician/composer George Cremaschi (doublebass, electronics) with whom he established Prague Improvisation Orchestra, Los Amargados duo, and an international dance-visual-music project called ‘Arthuur’. In 2013, Petr released the album ‘Villa K’ and 2014 ‘Los Amargados’ with Susanna Gartmayer, an album with a comic style story accompaniment. In 2011 he conceived a duo with Korean experimenter Ryu Hankil who plays various objects such as alarm clocks and typewriters as instruments entitled ‘Yanagi’.


Millie Watson is a graduate from ANU School of Music and a part-time member of the Canberra Experimental Music Studio. She performs with piano/organ/objects and found sound recordings that in turn inspire her live improvisation. Inspired by Feldman, Cage and Taylor, Millie’s style draws upon free improvisation and her classical roots. She performs regularly around Canberra and has started working in the free improvisation EMSC trio and well as her solo pop material that was released in mid-2018.


Rhys Butler has come to know the cities he has lived in through improvised and noise music. The Alto Saxophonist formed the trio ‘Dinner Sock’ with Stephen Roach (drums), and David Keyton (feedback), from the weekly Fugue State Sessions in Guanzhou, China. The group performed with local experimenters such as Yan Jun, Feng Hao and Li Zenghui and collaborated with musicians transiting China such as Uwe Bastiansen (Faust) and Lucas Abela. Despite living in different corners of the world, Dinner Sock has continued to participate in China's experimental music scene and played Beijing's ‘Sally Can't Dance’ festival and NOIShanghai in 2012.

Whilst in Santiago, Chile, Rhys participated in events run by Productura Mutante and played in the free-for-all Collective Improvisation NO. Now residing in Canberra, Rhys has been working in a duo with Reuben Ingall (live processing). More recently he has been part of the Psithurism trio with John Porter and Richard Johnson. Psithurism recently have a new release out called ‘Lure’ with French clarinetist Xavier Charles.


Richard Johnson performs with the texture of sound on soprano/baritone saxophone and bass clarinet and is experimenting with use of a bass drum with soprano saxophone to create a language of microtonal textural resonance. He has also been making instruments from conical gourds from PNG, which allow the stripping back of the wind instruments to their most visceral and most sensuous form and the exploration of extended techniques. He has performed at every SoundOut festival between 2010 and 2016 and has also appeared at the What is Music Festival, Nownow Festival, the Make it Now performances and many more. Richard is the Director/Curator/Producer/Administrator at SoundOut festivals.