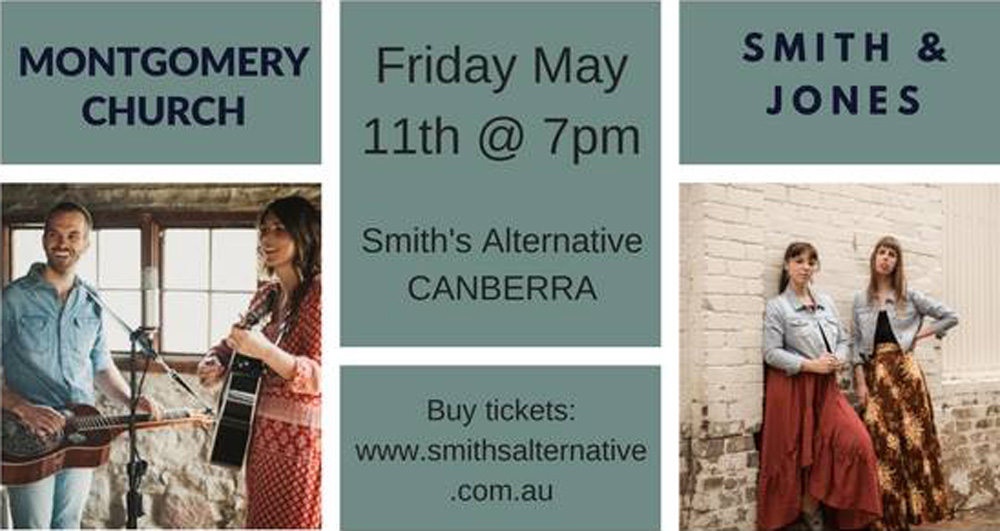 Cielle Montgomery and James Church are ‘Montgomery Church’ - a blend of acoustic folk, americana and bluegrass influences, grown and distilled in the Snowy Mountain ranges of country New South Wales. With their organic union of dobro and guitar, harmony vocals, and tasteful songwriting, this captivating duo are enthralling in their dynamic intimacy and embrace all that is subtle, spacious, and sensitive.

Since their formation in 2016, Montgomery Church have been quietly but quickly gathering a fan base who site their undeniable musical and personal chemistry as a rare and beautiful thing to see live.

Currently, Cielle and James spend many months of the year on the road, touring around in their beloved 1986 caravan “Bessie”, with their two black labradors, Wilson and Tilly; whilst writing a bunch of new songs in preparation for their first full length album "In the Shadow of the Mountain" which is due for release in April 2018.

"When listening to the beautiful acoustic sounds and instrumentation, you can’t help but draw comparisons to the great Allison Krauss and Union Station. It’s so exciting to hear a new artist stand up and run their own race"..... Aleyce Simmonds - Award Winning Australian Country Music Artist

Smith & Jones are a duo hailing from Bathurst and Tamworth respectively. Made up of keyboard player and vocalist Abby Smith, with guitarist, harmonica player and vocalist Sophie Jones, they met at a much loved record store in 2013 where they bonded over a love of classic country and blues, and spent far too much of their hard-earned money. During this time they established The CanBeltos Choir, a Bathurst and Orange based community choir, which saw them nominated for Young Australian’s of the Year for 2015.

Though their small-town roots had similarities, their music upbringing couldn’t be more contrasting. Sophie Jones grew up on a blend of classic country and old school rock (think Fleetwood Mac, The Eagles) as well as Australian legends such as Kevin Bennett, who she saw play many time as a kid growing up in Tamworth. Soul music and jazz (as well as endless Joni Mitchell) were Abby’s very first influences as a child, and she can recall staying home from school to learn sing like Aretha or Nina. Together, these influences have been the basis of Smith & Jones’s charm, and though their voices offer their own unique appeal when solo, it is together that they find their true expressive power.

In late 2016 Smith & Jones finished recording their debut album, ‘Dark Gives Way’, with Michael Carpenter at Love Hz in Sydney. The first two singles, ‘Baby Blue’ and ‘Small Town Woman’, both went to number one on the online Australian Country Radio charts. On the 3rd of March Abby and Sophie launched their album to a 300-strong hometown crowd in Bathurst. The launch took place in a hangar at the Bathurst airport that the girls transformed into a live music venue, which is a testament to the love and support they receive from the Bathurst community. 2017 will see Smith & Jones tour ‘Dark Gives Way’ regionally and interstate with follow up singles planned for the rest of the year.

Though their roots will always remain in the foundations of country music, their originals have found an undefinable energy of their own. Part classic country ballads, part sweet jazz standards, and often with a tongue firmly planted in their cheek,
their beauty is in their harmonic simplicity and lyrical power.