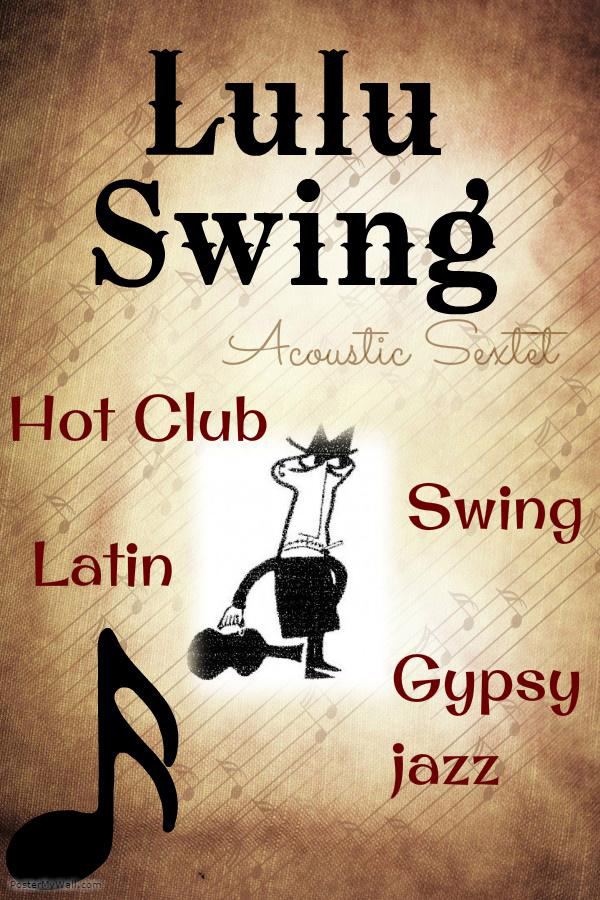 Come and join Lulu Swing for some sublime sounds at Smith's as the sun goes down on another weekend. Lulu will be joined by guest vocalist Monica Moore in the second set.

Lulu Swing is a Canberra swing/Hot Club/Latin acoustic jazz lineup whose members have for many years dutifully ventured out amidst Canberra's increasingly feral drivers to arrive frightened but essentially unharmed at a suburban crib to play a few tunes, compare catering and relate road survival stories. Just for the thrill there has been the occasional special public appearance. Formerly a quintet and more recently expanding to a septet, finding a lounge room to accommodate the growing ensemble—or a pot to contain the bubbling musical gumbo thus created—looms as a slightly daunting, if exciting, challenge.

First among equals in the band as musical director and arranger is local guitar royalty Ang O'Reilly (guitar). Ang and fellow Jazz School alumnus and brother Consul 'Jaco' O'Reilly (bass) provide the exciting if dangerous frisson of excellent musicianship, Irish-Spanish passion and fraternal discord. Doug 'Speed' Macnicol (violin) brings a considerable classical pedigree and depth of musical scholarship to the original lineup in his Paganini-meets-Grappelli, take-no-prisoners raid into jazz and Latin territory. Ron Cameron and Rich Starke (rhythm guitars) ply their craft in the rhythmic engine room with stoicism and fortitude as they search for a version of 'la pompe' they can call their own. While not moonlighting as 'The Two Gumbies' they can usually be found lurking—like a couple of grandfathered supernumeraries in some forgotten quango—within the rhythmic wall of sound they are paradoxically instrumental in creating. Thus rounds out the original quintet of ‘permanent, ongoing staff’.

This core organisational structure has been enlivened with a hefty dose of private sector hunger and initiative with the injection of sometime impresario and brushes legend Jon 'Bongo' Jones, aka ' Mr Hitty', a continuous and exuberant presence on percussion. While he may appear to be having a hoot brushing away the flies from last night's pizza box or channeling Maynard G Krebs, ‘JJ’ is dedicated to the serious business of both steering the good ship Lulu away from the shoals of temporal shipwreck and getting the band out and about more.

To say they all come together to celebrate the music of Django Reinhardt and Stephane Grappelli would be a little misleading. Nevertheless, the discerning listener will note the generous dollop of ‘gypsy jazz’ in their concoction—sometimes sweet and dreamy, sometimes hot and frenetic, but always melodic, lyrical and uplifting. Their sets usually feature some music from that genre, other tasty arrangements of some well-known and not so well-known tunes from the 30s and 40s, a bit of Latin and the odd quirky surprise.