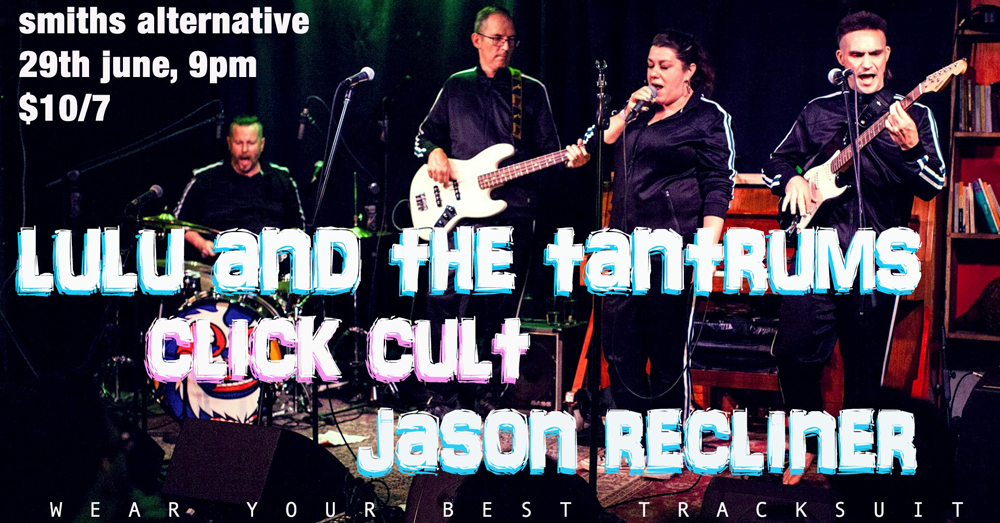 Lulu and the Tantrums
w/ Click Cult and Jason Recliner

Close your eyes and imagine this graduated night of sonic thrills - the evening begins with raucous folk, shifts up into punchy indie jangle, before Lulu and The Tantrums assail you with the catchiest late-onset brat-pop this side of Rockaway Beach.

Close your eyes and imagine this graduated night of sonic thrills – the evening begins with raucous folk, shifts up into punchy indie jangle, before Lulu and The Tantrums assail you with the catchiest late-onset brat-pop this side of Rockaway Beach.

LULU AND THE TANTRUMS

WHAT TYPE OF LULU AND THE TANTRUMS FAN ARE YOU? TAKE THIS QUIZ! Are Lulu and the Tantrums:

A. The puppet regime of pop dictator Luke McGrath in his ceaseless quest for complete creative control?
B. A garage rock racket fronted by a late-blooming bratty upstart who needs to listen to the drummer more?
C. Nick Delatovic's entry in the World Air Guitar Championships - now with actual guitar?
D. Final proof the best punk music is written by smug boujee late-30 somethings and authenticity is bullshit?

JASON RECLINER
Do you like dads and rock music? Then you will love Canberra's premium dad-rock band Jason Recliner! Their internet presence is minimal but their songs are far from cynical! Jeff Thompson – brainchild, son of a preacher man, serialised novelist – will woo you with his dulcet tones and homophones about West Wyalong, the Lyneham Motor Inn and how confidence is a scam that gets you nowhere.

Featuring a murderer's row of Canberra's best musicians (many recently seen taking the podium at Canbeurovision 2019), their acerbic tunes and handsome faces are not to be missed!

CLICK CULT
Click Cult sing about the frustrations of modern life in Australia (see: our politicians) and the importance of seizing joy when and where you can, whether that's just a bag of Doritos on special, or calling in sick and watching Grand Designs. Their songs are sharp, funny, sad – they're full of ennui but also feel like the warm hug of a friend gently whispering in your ear, 'it's okay, I feel the same way too sometimes. You gotta laugh – if you don't, you'll cry'.

Their music is self-described 'suburban folk-punk' – Billy Bragg if he'd grown up in Tuggeranong instead of Essex. There's some The Pogues in there too – heart-on-sleeve melodies mixed with lilting chords and a wry self-awareness. Are they your favourite band? Then we'll see you there! Could they be your new favourite band? Come find out!