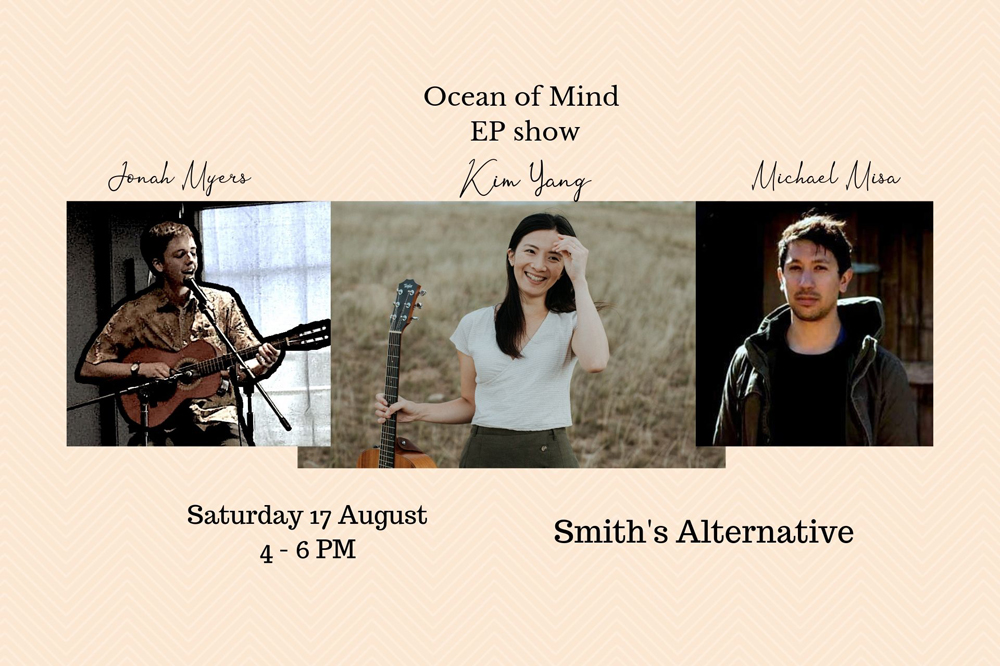 Kim Yang makes her return to Smith's in the first stop of her mini debut EP tour, with friends Michael Misa and Jonah Myers.

Taiwanese-Australian singer-songwriter Kim Yang makes her return to Smith’s in the first stop of her mini debut EP tour. Kim's ethereal voice and soothing instrument fingerpicking capture the attention of passers-by. Inspired by female vocalists like Sarah McLachlan, Kina Grannis, First Aid Kit, and Eva Cassidy, Kim’s music is an eclectic blend of folk, pop and blues. Her songs speak from her experiences as a partner, a daughter, a traveller and an insecure soul.

Since developing a passion for music at an early age, Kim has shared her voice everywhere from intimate bookshops to national television. In 2016, driven by a desire to share her stories with the world, Kim picked up her ukulele and started writing songs. She stepped out of her bedroom and into the streets, markets and cafes of Canberra. Since then she has collaborated with renowned local artists and played at major venues in Canberra, around Australia and overseas. Most recently, Kim played her first festival gig at the April 2019 National Folk Festival and released her debut EP Ocean of Mind in May 2019. This EP features 3 melodious and emotional songs about love, hope and loss that are very close to her heart. With Kim's ethereal blend of sounds, she creates music that balances delicately between vulnerability and power.

Kim will be joined by her Muddy Wolfe bandmate Jonah Myers. Jonah is a songwriter, producer, and multi-instrumentalist working in many different genres. Recent projects of his include Support ACT: The Canberra Music Podcast, an album called endothermia and the release of a song every day in August of 2019.

And also by long-time collaborator Michael Misa. Michael is a Canberra musician who plays as a soloist and with others including fellow guitarist Michael Dalvean as part of an acoustic fusion duo. Drawing on a wide range of influences from folk, latin, jazz, and classical traditions, Michael loves exploring the intricacies of different musical forms and what can be conveyed through their expressions.