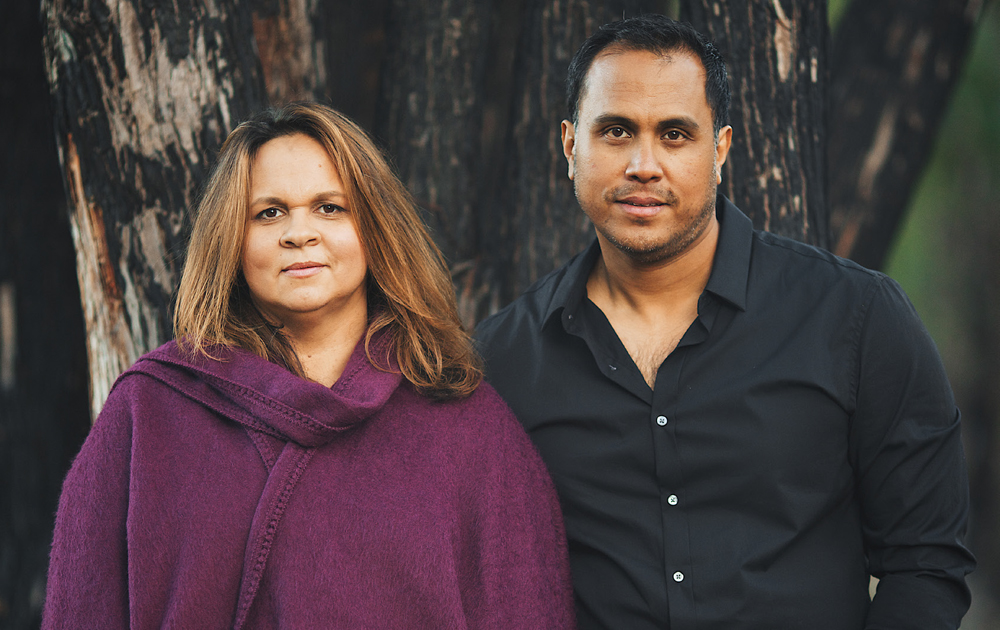 Gina Williams and Guy Ghouse
Music in the Noongar Language

Guitar brilliance and incandescent vocals. These exceptional performers connect and capture audiences through the power of songs sung in Noongar language.

Guitar brilliance and incandescent vocals. These exceptional performer connect and capture audiences through the power of song. And it’s made even more special when it’s sung in rare Noongar language.

Gina Williams and Guy Ghouse have firmly established a reputation across Australia for bringing a fresh, modern take on ancient traditions; merging evocative sounds, natural acoustic instruments, poignant stories with that incredible, beautiful voice. The natural rhythms of the language are perfectly captured and represented, and there’s an onstage connection and charisma that comes from two good friends who simply won’t quit.

Australian Indigenous music Icon and National Treasure, Archie Roach, has likened Gina to being a modern day Edith Piaf, telling his audiences that Gina “takes this old, old language, writes and sings these beautiful songs so that we in the audience cannot help but fall in love with the romance of it all.”

Gina is a Balladong daughter; one of the 14 clan groups which make up the Noongar nation, covering the south west corner of Western Australia. She also has links to the Kija people of the east Kimberley region of WA. By official records, Noongar language is critically endangered (there are less than 400 recognised fluent speak ers left). Her mother and grandmother, both part of the stolen generations were never allowed to speak their languages. Gina wasn’t stolen, but was relinquished as a baby for adoption. Telling her story and singing these beautifully crafted songs in language is deeply personal.

“I grew up not knowing anything about my true history. I’ve had to go back as an adult and learn. I don’t regret this, but it means I’ve had to claw territory back. I wanted to learn the language, to write songs so that I could teach my children. It’s an incredibly beautiful language – when I hear Noongar language I hear music, it literally sings to me.”

Performing with the all-important blessings of her elders and her community, this Balladong songbird will leave you breathless!