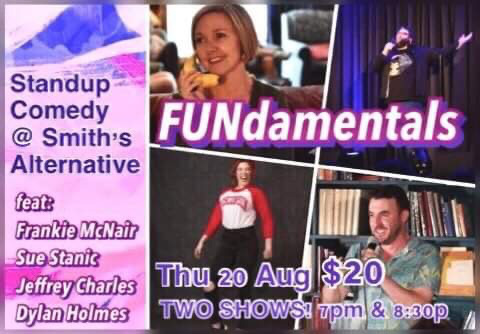 Need a laugh? Want to get out of the house? Streamed everything in the universe? Canberra's newest comedy room, FUNdamentals, has got your back.

Come along and see some of Canberra’s established comics at Smith’s alternative, Thursday August 20. Your lineup for the inaugural show - Frankie McNair, Dylan Holmes, Sue Stanic and Jeffrey Charles.

Frankie McNair is Canberra born Melbourne based comedian who sold out her 2019 solo show Frantasia, has performed at fringe festivals across Australia, and has spent this year scared and confused. She has the energy of a fun aunt.

A self proclaimed loveable mess, Dylan Holmes is an emerging Canberra based comedian and is an aficionado of all things pop culture. A RAW comedy state finalist Dylan seeks to use a frolicsome lens to examine the highs and lows of being a casually depressed millennial.

Sue Stanic is a proud member of gen X and a RAW Comedy State Finalist. During Sue's set, you will gain insight into: how to deal with friends that try to sell you things; whether marriage and kids is for you; and what it's like to be from Goulburn. Fascinating. It's basically a community service announcement that no one asked for.

Jeffrey Charles is a comedian originally from Sydney who has sold out Sydney Fringe Comedy Festival shows. In Jeff’s set you will be taken on bizarre bourgeois journeys of failure within his life as a parent, teacher and husband. Watch Jeff struggle against his challenges which range from the mundane to utterly absurd.

Due to COVID restrictions, maximum capacity is 24, so there will be two sittings.