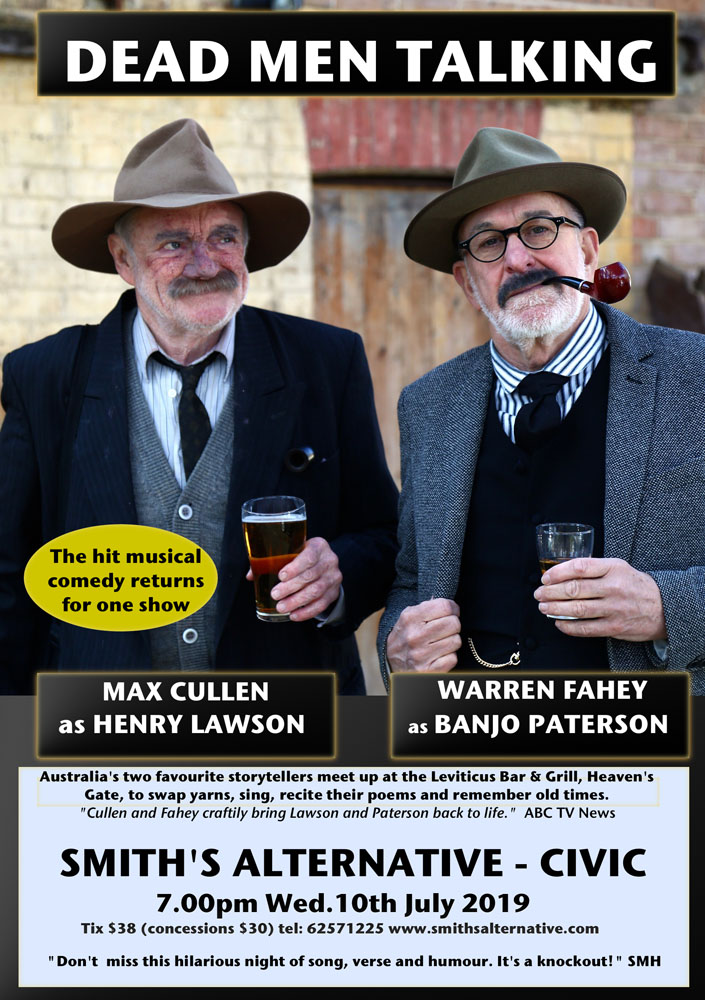 Dead Men Talking – the two-man, one-act stage musical devised and scripted by Max Cullen and Warren Fahey, has been a wild success since it was first performed in 2014. Audiences love it!

The lively one act show finds the two legendary literary figures having a casual drink at the Leviticus Bar & Grill, Heaven's Gate, and yarning about their legacies. Slightly cantankerous, yet grateful of their old friendship, Henry Lawson (Max Cullen) and A. B. ‘Banjo’ Paterson (Warren Fahey) discuss each others lives including their famous 'War of Words' in The Bulletin. They recite poems, sing songs and generally banter – and have a laugh about life’s changing circumstance.

Henry Lawson and Banjo Paterson left extraordinary legacies to Australia and they should never be forgotten. As the world increasingly succumbs to the never-ending and somewhat inevitable pressure of ‘one world culture’ it is vital that small nations like Australia fight back to show their uniqueness. Our national identity was born in the bush and is one of feistiness and determination where pioneers battled with bushfires, floods, droughts, insect plagues and, quite often, authority and the banks. They also fought loneliness and despair but somehow-or-other came out the other side to build this great nation.

Lawson and Paterson emerged at a time when we needed masterful storytellers who would talk to us in our own language and at our own level. They both took the old bush stories and songs and gave them back to us in a colloquial literary catalogue that bridged the gap between bush and city. They gave us a unique voice that still rings true blue today.

Max Cullen is a celebrated Australian actor for stage and screen. He is best known for roles in Skippy, The Flying Doctors, X-Men Origins: Wolverine, My Brilliant Career and The Great Gatsby. In November 2015 he took a two-month break from Dead Men Talking to join Geoffrey Rush in the STC production of King Lear. He has won more awards than you can poke a stick at including a Logie, Sydney Theatre Critics Award, Film Critic’s Circle Award and several AFI Awards. Born in Wellington, NSW, and now living in Gunning, he has a great affinity with the bush and the stories that contributed so much to the Australian identity.

Warren Fahey has been collecting and performing Australian bush traditions for nigh on 50 years. He is a regular on ABC radio and television.  Author of 30 books, including the centenary edition of A.B. Paterson’s Old Bush Songs (ABC Books 2005). Founder of the pioneer and feisty independent Larrikin Record label he was Australian Music Person of the Year (2000). He has been honoured with the Order of Australia, Prime Minister’s Centenary Medal, The Bush Laureate Lifetime Achievement Award and, in 2010, Australia’s highest prize for lifetime service to music, The Don Banks Music Award. He prefers to say he is a graduate of the Dingo University of the Outback.