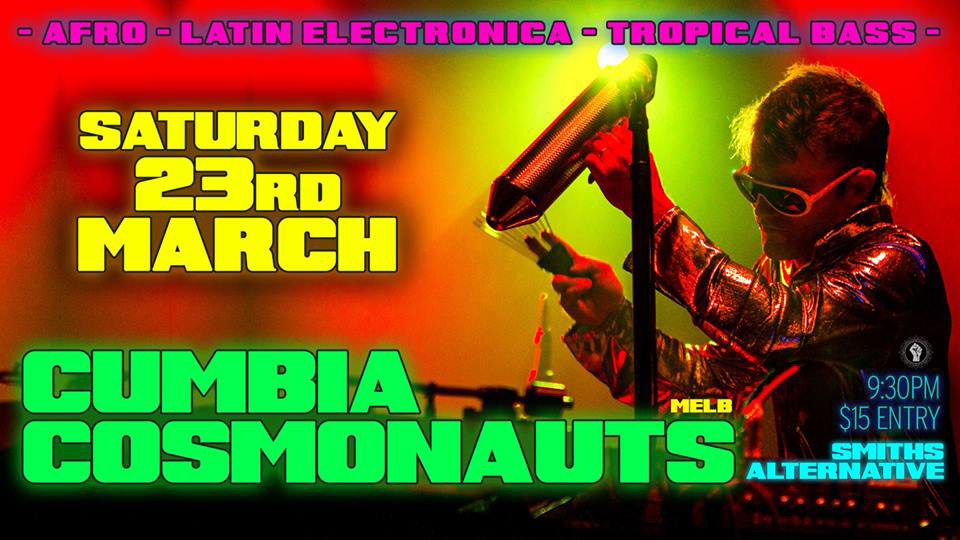 Tropical Bass phenomenon the Cumbia Cosmonauts blast cumbia into the future and beyond with a science fiction soundtrack lost in the Amazon jungle!

Cumbia Cosmonauts will be launching their new album RADIO AFRICA (Hawaii Bonsaï records) - a record on which their sound is once again taken into new directions exploring the universe of West African musical traditions in studio collaboration with Griot artists Lamine Sonko and Amadou Kalissa, and Nigerian trumpet player Olugbade Okunade (Egypt 80).

“The potent Cumbia Cosmonauts show is full of colour. Dancing is the inevitable reaction to their mix of Latin and African rhythms with electronica...letting us know that yes, it's possible for Australians to exist with a 100% Latin spirit." - yourbanclash.com (Mexico)

"Cumbia Cosmonauts took crowd to a previously uncharted corner of Colombia with their own personal brand of space-age Cumbia...incorporating suggestive digitally modulated vocals that projected the traditional take on Cumbia music right into the future...lively and decidedly entertaining act that had the crowd hitting the dance floor to the beat of their enormous cowbells." - pagesdigital.com (Australia)

--- WHO ARE Cumbia Cosmonauts? ---
http://www.cumbiacosmonauts.com.au

The music is produced by Moses Iten in collaboration with Thomas 'Soup' Campbell, and is a combination of infectious Afro-Caribbean rhythms with warm dub bass lines, sweeping synthesizers and driving beats.

Moses Iten lived for some time in Mexico, and returning to Melbourne in 2008 started the Cumbia Cosmonauts inspired by the culture of the Mexican Sonidero sound systems DJs, as well as a contemporary generation of producers pioneering what has become known as Cumbia Digital.
Their debut full-length album Tropical Bass Station was released in 2013 - a genre-defining release on which the production reached way beyond the Cumbia Digital movement with influences from the club sounds of Brazilian Baile Funk, Angolan Kuduro and Mexican Tribal. Tropical Bass Station was launched on a second Europe tour in 2013, and numerous shows around Australia including Adelaide Festival, St Kilda Festival, Rainbow Serpent and Next Wave Festival.

The second full-length album Cumbia Cosmonauts & The Radio Africa Band is set for release in 2019, on which their sound is once again taken into new directions exploring the universe of West African musical traditions in collaboration with Griot artists Lamine Sonko and Amadou Kalissa, and Nigerian trumpet player Olugbade Okunade (Egypt 80).