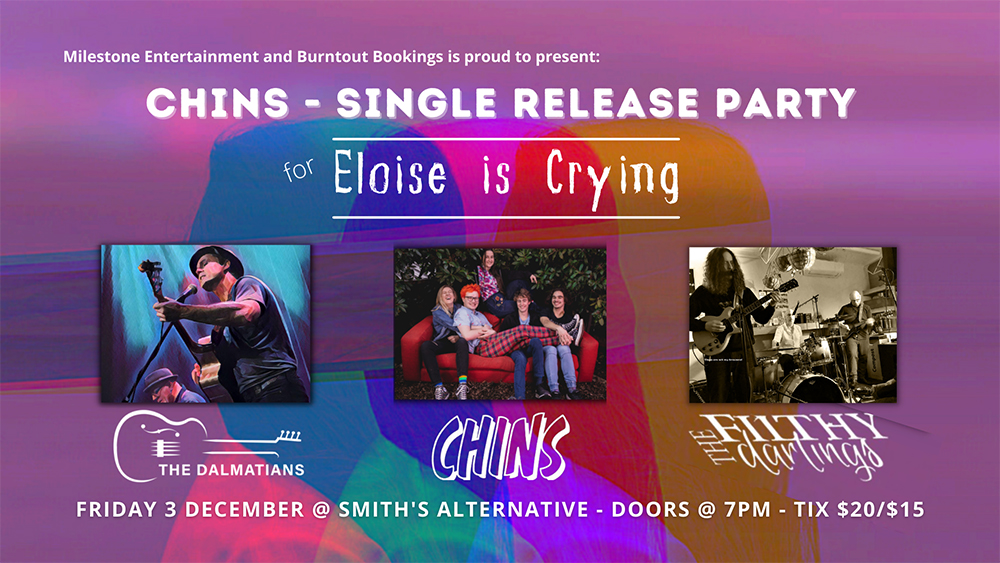 with The Dalmatians and The Filthy Darlings

Chins’ new single ‘Eloise is Crying’ is being released on 30 October. True to tradition, Chins are celebrating at the venue that gave them their first gig - Smith's Alternative.

Joining them on the night, are The Dalmatians ft The Two Peas' and 'The Filthy Darlings'. Don't miss this one, tickets are strictly limited and it's going to be a great night. A celebration for Chins, surrounded by some seriously talented musicians – all excited to be gigging again and set to give you their best!

More about the bands:
Chins:
Hailing from Canberra, Chins are a five-piece Indie Rock band – think “The Cure” meets “Surf Curse” with a twist grunge and a side serve of punk.
Formed in 2019, Chins ventured on to the Canberra venue circuit late 2020, and they haven’t looked back.
In March 2021 Chins released their Debut Dual Single 'Room 82' containing 'Bojack' and 'Margo' getting rave reviews and describing Chins sound as undefined by just one musical genre.
In May 2021, Chins released 'Back in the 80’s'. Lead singer, Madie Cook's voice was described as reminiscent of Siouxsie.
With a combined 96,000 streams on Spotify, Chins music continues to develop and evolve.
With the fourth single recently released, it is written from the heart, 'Eloise is Crying', speaks to an almost indescribable depth of pain that comes from a deep sense of betrayal, anger and loss.
With diverse musical influences from 70’s, 80’s and 90’s, Chins have created a unique sound drawn from the well-known (and not-so-well-known) artists of those decades. Combined with the current Indie artists and the much-loved Aussie Pub Rock sound, you are guaranteed to embark on a musical adventure!
The Dalmatians ft The Two Peas:
Speaking of musical adventures, the exceptionally talented Dalmatians combine acoustic guitar, bouzouki, vocal harmonies and backing tracks, to create catchy grooves, dance beats and woody ballads.
Their current single ‘It’s Only Money’ will have you taping your toes, combining folk with Rock’n’Roll.
Fresh from supporting Steve Kilbey (of The Church) in February 2021, the Dalmatians have played across many Canberra venues.
Often joined by the stunning Amelie from The Two Peas, you will be delighted with a lush series of acoustic pop rock songs formed by painting musical layers on top of the spunky acoustic guitar riffs. Their current singles ‘I’m Not Going Home’ and ‘The Other Side of the Tunnel’ exemplify this approach.
Wil has a strong and genuine vocal reminiscent of The Church, George Ezra, REM or Paul Kelly. Amelie’s naturally vibrant voice is both haunting and beautiful.
Jonny provides wondrous grooves and sparkling textures from his bouzouki and acoustic guitar.
The Dalmatians songs are humorous and engaging. With their easy-going demeanours, eons of experience and an extensive play list, expect The Dalmatians to charm your musical shoes off!
The Filthy Darlings:
A project started from desperation is quickly becoming a machine in need of oil to lube its gears!
The Filthy Darlings are not the darlings you come home to. As filthy as The Police, but as sincere as the Darling Buds of May, they are the first point of call in a musical emergency.
Formed in 2018 in the wake of the Republican Party’s loss of the House of Representatives, and as Nicholas Lee-Murphy woke unremarkably, four friends agreed it was time to cast off the shackles of domesticity and set sail into the turbulent waters of middle aged music production. Many have tried to put their footprint on this seismic endeavour, but where they failed The Filthy Darlings walk weightlessly across the moonscape of opportunity.
From the ashes of oppression, The Filthy Darlings were conceived and the Ashes came home to southern shores again. They are four pioneers on a quest. "Our lives are our own but our music is yours." Contemporary meets classical, metal meets wood and rock beats paper in this ensemble rich in harmonic content and poor in financial gain.
We hope to win your hearts and that will be a fitting silver medal for this band always on the precipice of giving a bronze performance.
See you there!

In the meantime, if you would like to be one of the first to hear ‘Eloise is Crying’, make sure to hit the pre-save link available via here.

As an extra bonus: show up on the night with a screenshot of you listening to your pre-saved 'Eloise is Crying', and receive some bonus Chins merch. As will anyone showing up wearing Chins merch (also available through Linktree).

Don't miss this, it's going to be a great night. A celebration for Chins and surrounded by some seriously talented musicians. It is an absolute pleasure to present this lineup!!