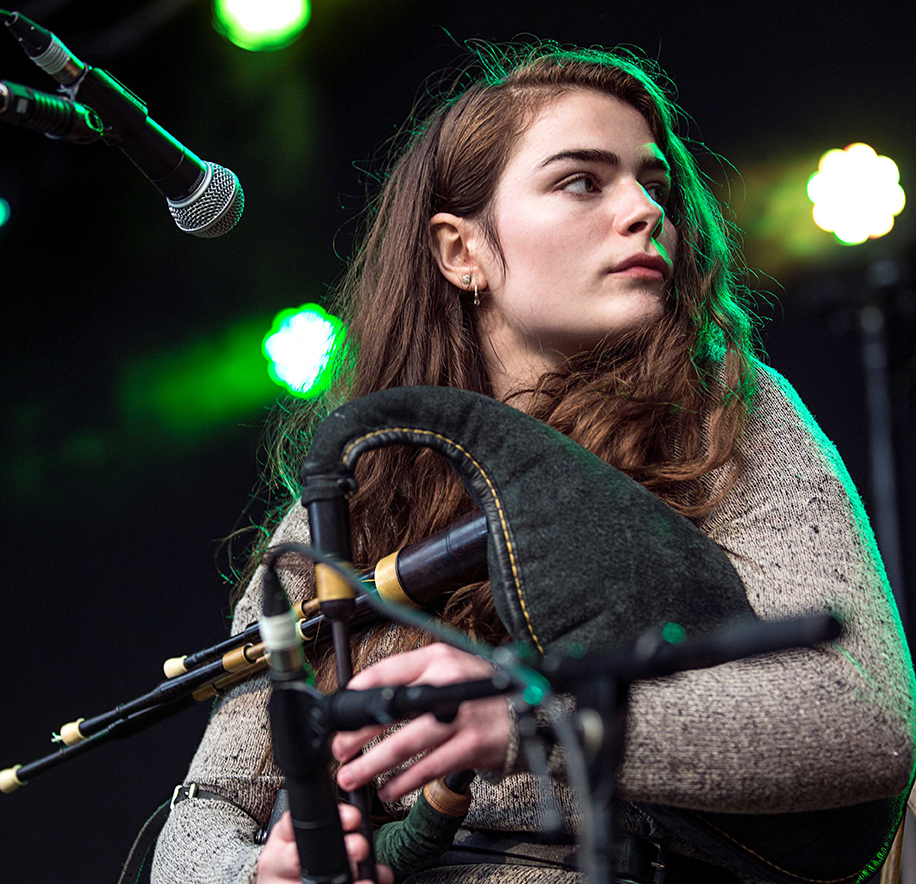 Winner of the 2016 BBC Radio 2 Young Folk Award, and 2017 Scots Trad Music Awards "Up and Coming" nominee, Skye musician and piper Brighde Chaimbeul is one of Scotland's fastest rising stars

Brighde Chaimbeul, is a piper from the Isle of Skye, where her music is rooted in her native Gaelic language. A recent winner of the BBC Radio 2 Horizon Award, her debut album The Reeling has been met with great acclaim. She is regarded as one of the leading players of the Scottish smallpipes, and is joined on this tour by Uilleann piper/guitarist, Jamie Murphy from Belfast, bringing together the music of Scotland and Ireland through the sweet sounds of their native pipes.

Brighde Chaimbeul is one of Scotland’s most exciting young musicians. A native Gaelic speaker, her style is rooted in her indigenous language and culture, but draws inspiration from a variety of piping traditions such as from Cape Breton, Eastern Europe and Ireland.

Her debut album ‘The Reeling’ has had an extraordinary response since it’s launch at a sold-out Celtic Connections show at the start of 2019. It was named as Folk Album Of The Month by The Guardian, and given five star reviews in both fRoots and Songlines, among many other awards and rave reviews.

She was joined on the recording by violinist Aidan O’Rourke from experimental folk trio Lau, who also produced the album, and Radie Peat from the Dublin band Lankum on concertina. The pioneering 82-year-old singer and piper, Rona Lightfoot, was also featured, contributing 'canntaireachd', a phonetic singing tradition used to teach pipe tunes (the word means “chanting” in Gaelic).

Growing up in a musical family in Sleat on the Isle of Skye, she was no stranger to the sound of the pipes, and indeed the sound of music at home. Hearing Rona play gave Brighde her initial inspiration to take up piping when she was just four years old. She began studying the instrument three years later.

Working closely with Aidan O’Rourke, Brighde has devised a completely new way of arranging for pipe music that emphasises the rich textural drones of the smallpipes; the constancy of sound that creates a trance-like quality in the tunes. She has collaborated with many established artists, including Ross Ainslie, John McSherry, Paul Meehan, Martin Green, Carlos Nunez and Allan MacDonald. Facebook.

Jamie Murphy hails from Belfast and has been surrounded by renowned musicians from a young age. He was taught by the legendary McPeake family and then by virtuoso piper, John McSherry, from Lunasa. He has toured across Europe and performed with the likes of Donal O’Connor, Francis Mclduff and Sean Og Graham. Brighde and Jamie both live in Belfast and take inspiration from the great music heard throughout the city.