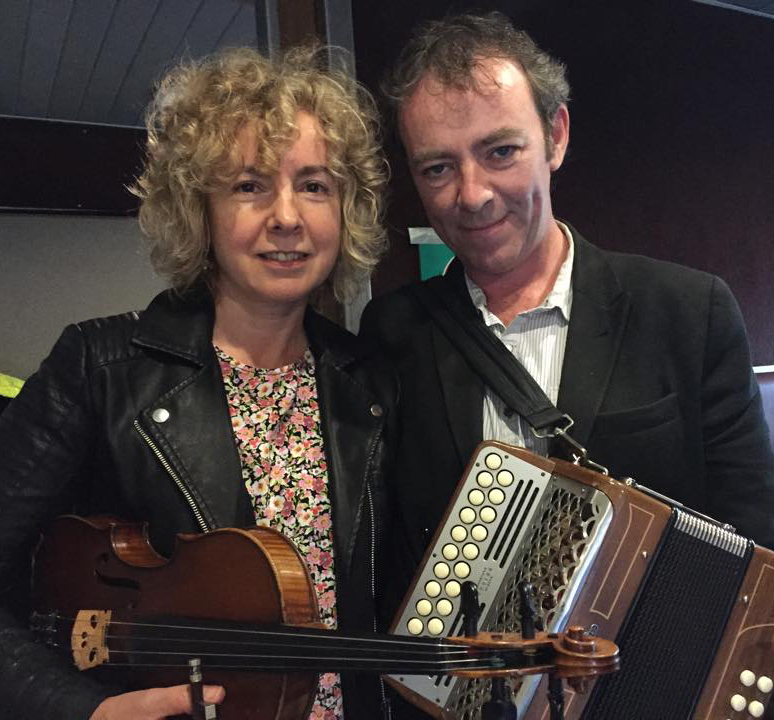 Brid Harper is hailed as one of the leading exponents of traditional fiddle playing of our time. Touring with Dermot Byrne, one of the great accordion players of his generation. Both masters of traditional Irish and Scottish music.

Bríd Harper, a Donegal native, is hailed as one of the leading exponents of traditional fiddle playing of our time. Encouraged by her parents, she grew up learning and playing Irish traditional music, going on to win numerous under-age All Ireland titles and other prestigious fiddle awards including the Senior All Ireland, Oireachtas na Gaeilge and Fiddler of Dooney. An MA graduate of the Irish World Academy at the University of Limerick, Bríd has toured extensively and performed with many great musicians including Dermot Byrne, Tony O’Connell, Steve Cooney, Donogh Hennessy and Arty McGlynn. Bríd is a highly respected teacher and has tutored at many summer schools and workshops throughout Ireland and in France, Holland and the USA. Her first solo CD was released in 2015 and has enjoyed much success to date.

Dermot Byrne hails from Buncrana in the Inishowen peninsula, the most northerly part of Donegal, and has played accordion since a very young age, having learned from his father Tomás O’Beirn, who comes from Teileann area of South West Donegal, and is an enthusiastic promoter of the tradition. Dermot had the good fortune to meet all the greats of Donegal music, including Johnny Doherty, Con Cassidy and Tommy Peoples, Danny Meehan and many more, and they made a great impact on the young Dermot, who went on to develop a unique style. His seemingly effortless playing, combined with great subtlety, and a faultless ear, makes him one of the great accordion players of his generation. As well as his mastery of the Donegal style and repertoire, Dermot can turn with ease to other styles and traditions such as French musette, or South American choro music. He guested on two Altan recordings “The Red Crow” and “Island Angel” before joining the band in 1994. Dermot has guested on collaborations with many great musicians including Seamus and Manus McGuire, Sharon Shannon, Salsa Celtica, Steeve Cooney, Dezi Donelly, Brid Harper, Frankie Gavin, Tommy Peoples, Pierre Schryer, Tim O’Brien and the late jazz violinist, Stephane Grappelli. He was the recipient of TG4 Gradam Traditional Musician of the Year in 2013.  According to Siobhan Long (Irish Times) his solo reording in 1995 and rereleased in 2015 is 'a timeless delight that stradles centuries with the agility and ease that Byrne's fingers ricochet across the reeds'.