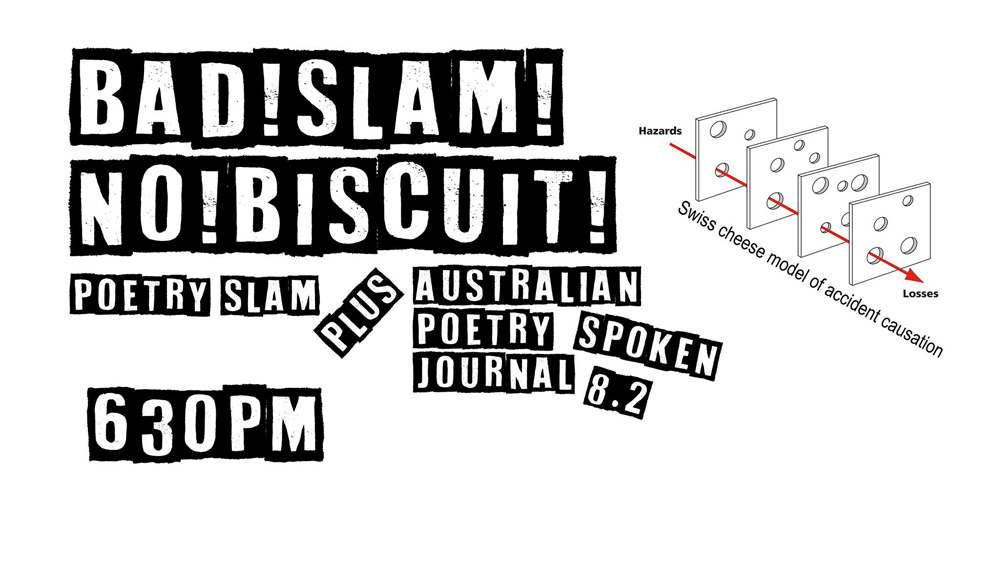 BAD!SLAM!NO!BISCUIT! WANTS YOU IN THE SMITHS ALTERNATIVE FOR POETRY SLAM! AND FOR CHEESE! AND FOR THE LAUNCH OF AUSTRALIAN POETRY JOURNAL 8.2.

BAD!SLAM!NO!BISCUIT! WANTS YOU IN THE SMITHS ALTERNATIVE FOR POETRY SLAM!

And that means POETRY SLAM and CHEESE
AND THAT MEANS THE BAD!SLAM!NO!BISCUIT! CANBERRA NATIONAL PIANO MAN!
And the Master of Conflict!
And the Poets!
And we have the feature acts!
And the audience!
And the judges!
POETRY SLAM WANTS YOU!

AND THESE ARE THE FEATURE ACTS!

Feature act 1: ROBOT ADAM HADLEY
Robot Adam Hadley is a Sydney based crime writer, poet and MC who has performed at the Sydney Opera House, The Cloncurry Merry Muster and Rodeo, The Queensland Poetry Festival, and the Alice Springs Writers Festival, where a leather daddy nearly choked him to death with a fistful of Pavlova. He has sold stories to The Fanciful Fiction Auxiliary, Killeroo and Decay Magazine. In 2016 he was accepted into the Hardcopy manuscript development program run by the ACT Writers Centre to workshop his novel Grim Harvest, a psychopulp western set in North Queensland.

FEATURE ACT 2: Nick Delatovic
Nick Delatovic is a writer, producer and performer based in Canberra. He has been one of the folks behind You Are Here festival, Canberra’s festival of experimental art, since 2011. An early participant of the Street Theatre‘s Hive program for emerging writers, Nick has written stage plays including Rig (2011) and The Last Prom (2013). As one half of music-and-film production company Lick Nuke he has created dozens of music videos and the odd short film, including the Screen ACT-commissioned Lights (2013). He plays or has played in bands including Babyfreeze, Cracked Actor and PROM. He has toured his one-man plays nationally and internationally.

So be in BAD!SLAM!NO!BISCUIT! and remember: