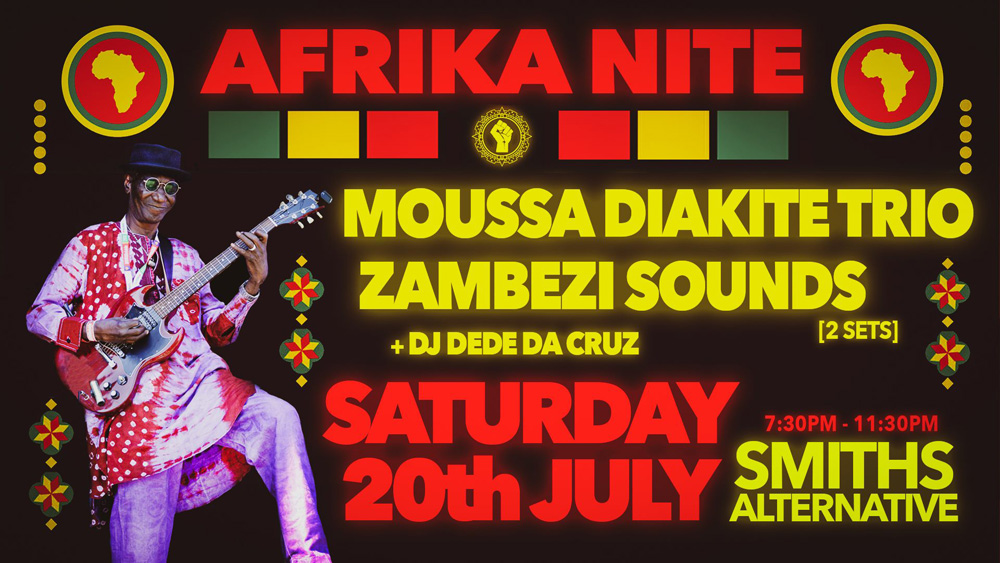 Influential guitarist Moussa Diakite was part of the golden era of Malian music in the 1970s and ‘80s, performing with some of Africa’s best, including Salif Keita, Oumou Sangare, Toumani Diabaté and the Super Rail Band de Bamako. Since migrating to Australia, he has stamped his mark on the local scene.

He will be performing with one of Australia's finest rhythm sections in percussionist Philippe Lincy and bass player Len Samperi as "The Moussa Diakite Trio". Together they fuse traditional West African styles with Cuban, blues and jazz into a unique “Afro-groove”.

Moussa Diakite has performed go great acclaim at WOMADelaide, Woodford, Illawarra Folk and Vivid Festivals as well as opening for Malian compatriots Tinariwen. This is a dynamic and sophisticated show irresistible on the dance floor and not to be missed!

“One of the finest guitarists I’ve ever heard” – Lloyd Bradford Syke, Australian Stage

Experience the sound of of Nyami Nyami mbira and the Zambezi river drumming. Afro and Reggae vibes to dance to with irresistible rhythms, oodles of charm, palpable enjoyment! Zambezi Sounds is music for lovers of culture, for owners of dancing feet, for letting your hair down, for reviving your soul and reminding yourself what a beautiful world we live in.

DJing for Dede Da Cruz is a 'right of passage' – a chance for him to share with audiences the myriad of the Transatlantic and Afro Latin Sounds, music, dance and culture.

With a deep love and knowledge of Latin and Afro-Latin music, each unique set by DJ DeDe is a musical and cultural transatlantic journey!