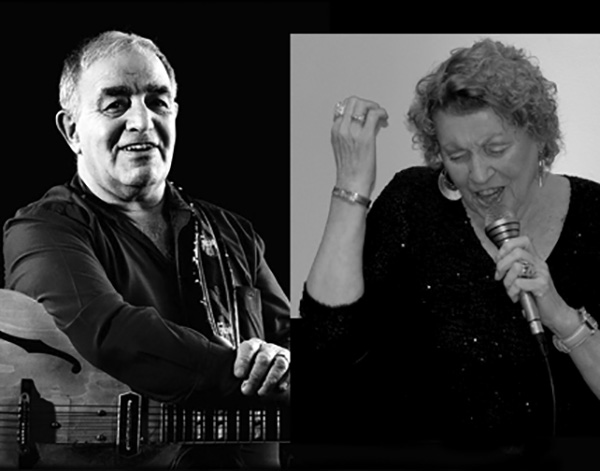 Esmond Selwyn has long been recognised as one of the UK’s greatest performing jazz guitarists, aview that has been readily seconded by many. A highly regarded sideman with Don Rendell’s band – one of the UK’s greatest - in the 80’s, he is in great demand for jazz festivals in the UK and Europe, as well as studio work and of course is a noted teacher and educator.

Esmond’s style forms a direct link with the great jazz guitarists of the past, many of whom are friends such as Tal Farlow and George van Epps and has appeared on the same bill as Charlie Byrd, Chick Corea and Elvin Jones as well as personally accompanying American jazz giants Art Farmer, Al Cohn and Jimmy Witherspoon.

At the International Guitar Festival of Great Britain in November 2016 with his quartet featuring great British Altoist Tony Kofi, Glyn Akroid of Bido Lito – The Liverpool Music Magazine said: “In Cool Blues and Blue Bossa his fingers do the talking then Nancy with the Laughing Face sees a floating Selwyn solo…while Bernie’s Tune finds his fingers a blur on the fretboard..then when he opens on Coltrane’s Mr. PC he demonstrates his famed technical ability….It is apparent that this is a night to sit back and revel in a choice set list delivered with absolute quality”

Now Australia will have the chance to embrace his talent and musicality. Esmond will be visiting Sydney and Melbourne during July and part of August 2017. He will be working with the veteran Australian jazz singer Sandie White during which time they will record a duo CD.

In a career spanning 60 years Sandie White – one of Sydney’s top jazz singers - has worked around the globe with enough top names to fill a “Who’s Who In Jazz” compendium. Sandie started her professional career in 1955 at the Australia Hotel, in Sydney under the name Sandra Louise.

She has worked all over the world with such luminaries as Ray Ellington and his 4tet, Ike Isaacs, Dill Jones and Basil Kirchin. In Germany, she was invited by Jazz Giants Lionel Hampton, Zoot Sims and Oscar Pettiford to perform with their bands in Wiesbaden, Paris and Stuttgart respectively. She was part of Mark Murphy’s first Australian Jazz Singers Summit at Kinsella’s and appeared with him on ABC TV as a guest on Don Burrow’s Supper Club presents…. and in 1986 she shared the inaugural Jazz vocalist of the year award.

1987 saw her opening “Upstairs” at Ronnie Scotts in London with the Harry South Trio and she was support to Ronnie at Kinsellas in 1989. She has appeared in many festivals such as Manly, Werana, Brisbane, Taree, Rockhampton, Noosa and Magnetic Island and has appeared in major venues in Sydney, Brisbane and Melbourne such as Dizzy’s jazz club, Top of the Treasury, Don Burrows Supper Club, Foundry 616, Brisbane Jazz Club, The Basement (Gold Coast). A 6th CD – So Many Songs – So Little Time will be released on March 5, 2017. Just a tiny snapshot of her career.

The sublime voice of Sandie White will captivate the audience with soulful renditions of jazz standards, vocalese stylings, and sultry torch songs. Her emotional depth and passion for storytelling will take you on a journey to another era, when jazz reigned supreme.

Eric Myers of “Jazz” magazine stated that Sandie is “One of the most convincing interpreters of the standard song in Australian Jazz”, John McBeath of the Adelaide Advertiser said “White’s vocal range, tonal quality and great jazz feel for expression and improvisation flows unfailingly,” and Jimmy Borges, Honolulu’s finest jazz singer says “I love your chops Sandie….Your phrasing on your ballads is so lovely…kind of “Shirley Horn”…and your swing is “On the Money”!!

Sandie White is not to be missed –
She’s cool and she’s hot! AND she’s a treasure!