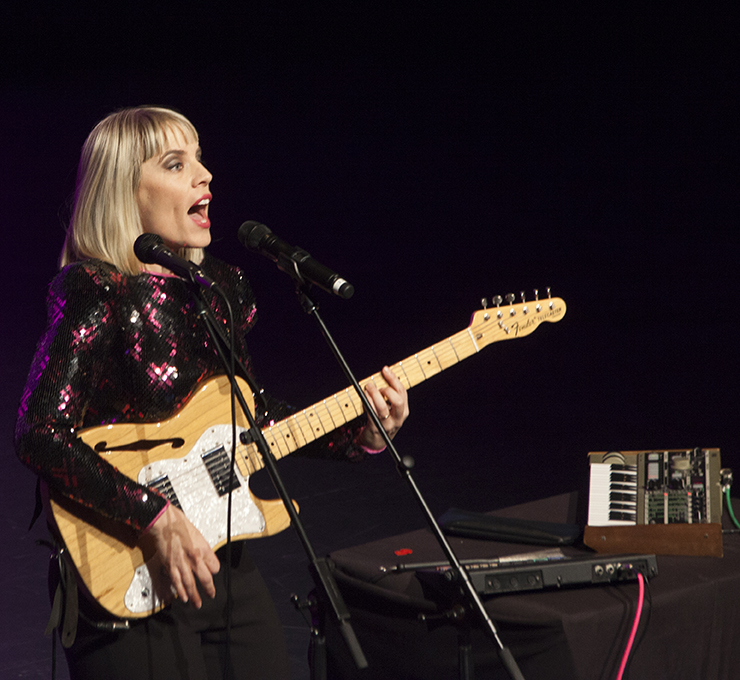 Jess Green's new project and stage name, through which she is pioneering her own style of pop; Afro-Sci.

PHENO pronounced fee-no, is electric guitarist/vocalist Jess Green’s new project and stage name, and under it she is pioneering her own style of pop; Afro-Sci.

She brings 21st century science to the wild rhythms of Afro beat, Indie rock and Jazz. Jess was based in Sydney for 12 years, performing with The catholics, Jim Conway, Alyx Dennison, Gary Daley, and her own bands, as well as touring nationally and internationally for the dance show Am I. She has recently re-located back to her home town of Canberra.

As PHENO Jess has created a new sonic world to live in, her music layers shimmering electric guitar, electro synths and beats with a stomping backbeat and powerful vocals.

PHENO crowdfunded through Pozible in 2016 to raise money to record a debut EP, and at this special show at Smith's, she is launching the first single ‘Dragon Year’. The EP is due out May 2017. Smith's is the beginning of an east coast tour, supported by the Australia Council’s Contemporary Music Touring Program.

PHENO has performed in Canberra and Sydney supporting Jessica O’Donoghue, Alyx Dennison and at Canberra Tedx. Jess won a CAPO award (Canberra Arts Patrons Organisation) in 2016 to help fund the release of her EP.

For this Smith's show, she brings you an electric three piece, all girl band ; Alyx Dennison  - Keyboards & Vocals,(Kyu/Richard in Your Mind) and Bonnie Stewart - Drums & Vocals (Bonniesongs)

Luciana Harrison is a broad-ranging and versatile singer-songwriter, who creates intricate songs and arrangements in a variety of styles. Her lyrics are rich in imagery and often explore binaries such as light and dark, the head and the heart, the self and the other and the space in between. She performs locally as a singer-songwriter with Pocket Fox, Oranges and solo. BMA Magazine named Oranges as a band to watch in 2017. In January, City News described Luciana as “one of Canberra’s leading singer songwriters”. The Brag described the 2016 Pocket Fox album as: “Pulsating with the influence of Sufjan Stevens, Fleet Foxes and Tune-Yards, the album abounds with intelligent lyrics, undulating harmonies and urbane polyrhythms.”