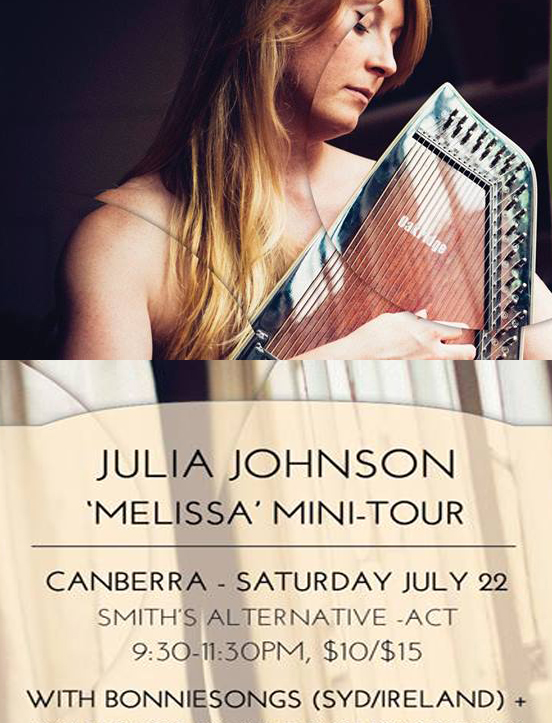 Julia Johnson’s psychedelic synth-folk single ‘Melissa’ heralds a shift in direction for the singer-songwriter best known for fronting alt-country/folk outfit Julia & the Deep Sea Sirens. The multi-instrumentalist will be heading on tour this winter to test the new music she has been creating.

'Melissa' is an ode to childhood memories, warped rumours and how the two can echo in your head and heart. Julia will also be previewing her other new songs, as well as playing a JDSS song or two.

Bonniesongs’s unique style ranges from mandolin-based folk songs with sweet melodies to looping grungy polyrhythms created between guitar, vocals and drums. Her delicate vocal style brings a hush to the audience, telling stories of mice, birds, dinosaurs, death and video games. Bonniesongs’s ethereal qualities beguile you into a dreamlike trance in the style of contemporary folk/alternative artists such as Joanna Newsom and Bjork.

“Her lilting vocals float over gentle peaks of acoustic and electronic instruments, layered ethereally into what may be a moderately enchanted loop pedal.” Reef James Gaha, Caramel Animals.

His most recent US tour took place during the 2016 election and his newest songs reflect the absurdity of the American dream.
With two records, and now a third on the way, The Burley Griffin has seen Evan's songs accompanied and interpreted by some of both Australia's and the USA's most intuitive musicians.

"A refreshingly different release, The Burley Griffin's new EP features songs that are generally short, sharp and leave you wanting more." - Paul Gough, The Inside Sleeve