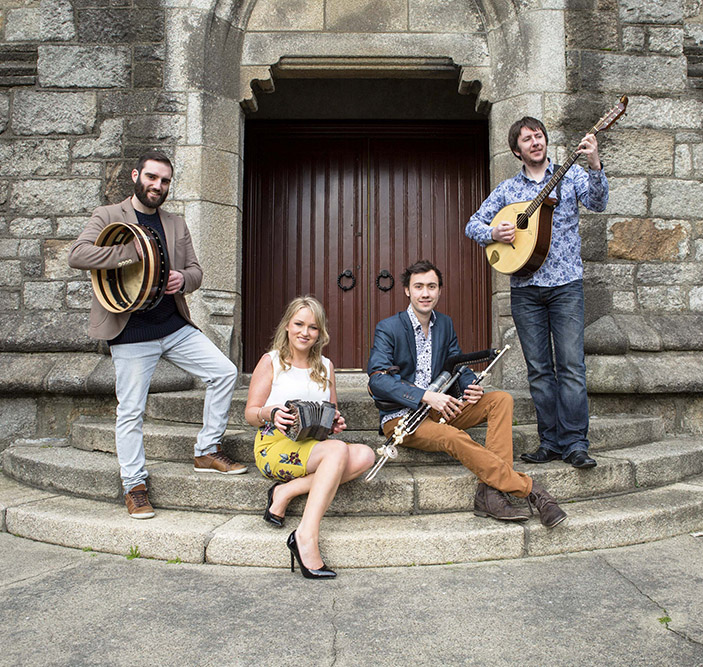 Deeply rooted in the tradition, FourWinds produce an exciting landscape of tunes and lyrics that present Irish traditional music in a modern and creative context. Their influences include Begley and Cooney, The Bothy Band, Planxty, Brady and Irvine, Moving Hearts, Pink Floyd and even Elvis. This energetic quartet delivers a truly unique musical experience.

The band has just been awarded the prestigious Danny Kyle Award, presented by the Celtic Connections festival board in recognition of outstanding emerging talent in Celtic music. FourWinds has also been chosen as one of three finalists in the Rising Stars Competition, held by The Gathering in Killarney, Ireland.

They’ve performed as FourWinds since 2013 however Daoiri, Tom, Caroline and Robbie have toured extensively throughout Europe, Canada and America in both solo and group contexts (The Daoiri Farrell Band, Solid Clarity and Tom Delany and Caroline Keane duo) for many years, having shared stages with such renowned musicians as Paddy Keenan, The Chieftains, Tommy O'Sullivan, De Temps Antan, FullSet, Muireann NicAmhlaoibh, Karen Tweed and many more.

FourWinds have just released their debut album, “FourWinds” and are looking forward to a long spring/ summer of performances around Ireland, Canada and Europe, including Brittany, France, and The U.K.

Caroline Keane (Concertina & whistles)
From a young age, Caroline was exposed to the richness of West Limerick and Sliabh Luachra traditional music, an influence which has become the cornerstone of her uniquely vibrant, passionate and emotive style of concertina playing.

Robbie Walsh (Bodhrán, percussions & backing vocals)
Robbie is a bodhrán player hailing from Dublin. He won the all Ireland bodhrán title in 2008 were he then went on to become a Full time musician. The art of the drum was passed on by his uncle. His powerful modern style is one of the foundations of the sound of the band.

Tom Delany (Uilleann pipes & whistles)
With an Irish father and French mother, Tom gained his musicality through osmosis, born and raised in a rich environment of Irish music. Inspired by the traveling style of piping, his rhythmic playing is powerful and daring.