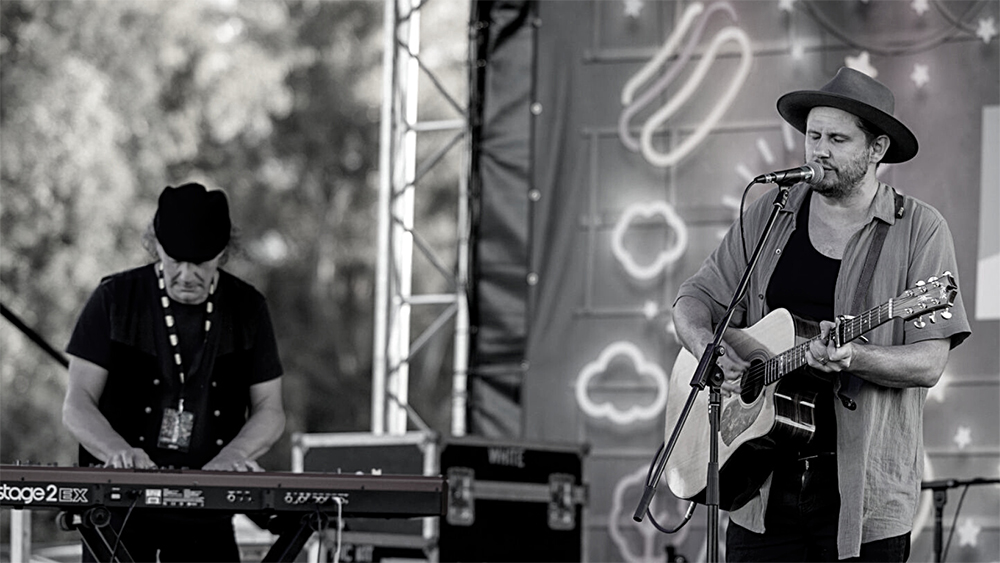 Join us for an afternoon of smashing tunes and energy Ben and Niall taking to the stage!

Ben Drysdale colours his heartfelt lyrics with musical shades of indie folk, soul, blues, funk and reggae tailoring the energy of a set to the venue: whether engaging a thoughtful listening crowd or filling a dance floor. A solid solo performer in his own right, Ben has enjoyed teaming up with Irish keys extraordinaire Niall Howe for a series of exclusive ‘acoustic’ duo shows. Howe’s roots in Irish folk and experience in Jazz piano complement Drysdale’s genre bending style perfectly.

Ben Drysdale
Drysdale has played shows in the US, Ireland and Canada and featured on bills with some of Australia’s greatest including Paul Kelly, The Waifs and Busby Marou as well as international stars such as Chris Isaak. His unreleased song ‘Listen Now’ was a semi-finalist in the 2020 International Songwriting Competition placing it in the top 9% of 26,000 entries. His recent release ‘Either Way’ (a duet with LA artist Justina Shandler) was featured on Season 3 of the US TV show ‘Good Trouble’ in March 2021 and MTVs Ex On The Beach in 2022. His music has also featured on The Young and The Restless. Ben’s catalogue has 30 music licensing deals across 10 agencies around the world.

After playing around Canberra and the East coast of Australia since 2004 both solo, and fronting a number of bands including Smitten, Beth n Ben, and 8-piece funk and soul outfit East Row Rabble, Drysdale is embarking on a new Indie folk project soon to be released under his own name.

Drysdale has released five studio EPs and a full length live album including Smitten’s self-titled debut EP (2007), Beth n Ben’s releases Boarding Pass (EP 2010), Economy Class (EP 2011), Scenic Roots (EP 2013), and Baggage Claim (Live Album 2015), and East Row Rabble’s debut self-titled EP (2018). Drysdale has co-written on 6 tracks that other artists have released including ‘Either Way’ by LA artist Justina Shandler which he featured vocals on. Another 5 track EP under the moniker Back Alley Scholar, and a 6-track solo EP are as yet unreleased and will be coming out in the near future.

Niall Howe
Niall has been obsessed with noise and has loved playing music for over 40 years. His style is the result of classical training on piano and pipe organ, combined with journeys through folk, jazz, rock, funk, ska and swing. He blends all of this is together, creating eclectic layers that build new dimensions into the songs he accompanies.