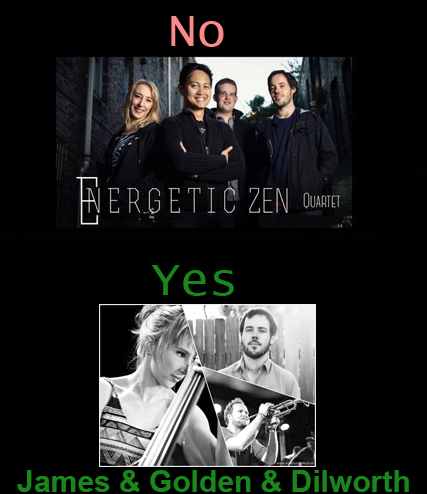 Unfortunately Energetic Zen Quartet are unavailable to play tonight but they have arranged a replacement act in James + Golden + Dilworth.

James + Golden + Dilworth is a special collaboration bringing together two of James’s favourite Sydney musicians and long time friends for an intimate concert of original works.

Over the course of the last 5 years James has had the great pleasure of playing extensively with both Golden and Dilworth in very different musical contexts and locations but never together. In one of life's many strange twists, these three musicians found themselves playing together in a chance encounter in Bali at the Ubud Village Jazz Festival in 2016. This proved the catalyst for the J+G+D trio.

The trio repertoire will lead you into shifting through-composed melodies, tranquil textures and pulsating grooves influenced by artists such as Avashai Cohen, Kenny Wheeler, Shai Maestro and Arve Henriksen.

Hannah leads the HJT and quintet project “Hatch” (both with new albums due for release in 2017), and co-leads the Sydney Womens jazz Collective. Other projects include the Energetic Zen Quartet, the Matt Keegan Band, Lady Sings it Better, Melville Project and Divergence Jazz Orchestra amongst others and as side person has performed with the likes of Ingrid Jensen, Sandy Evans, Alister Spence, Andrea Keller, Katie Noonan, Don Burrows, Angie Hart and Dean Manning including tours of the UK and Indonesia.

Long term collaborator Casey Golden is a strong band leader in his own right with the highly acclaimed Casey Golden Trio recently releasing their 4th album “Miniature’. At the age of 17 he won a BBM Jazz Award that sent him to study and play with musicians in London. He has been a finalist for Young Australian Jazz Artist of the Year in the Australian Jazz "Bell" Awards, a finalist in the APRA Professional Development Awards in 2013 and nominated for a Freedman Fellowship in 2015. Additional playing credits include working with

Eamon Dilworth, whose trumpet “sometimes carries a blast of the raucous vibrancy associated with Balkan Gypsies or Spanish bullfight bands” (Sydney Morning Herald) has established himself as a trumpeter, creative musician & manager with regular performances across Europe, Australia & New Zealand alongside musicians from the far reaches of the genre-spectrum from improvised to mainstream-pop music. Eamon is only back in the Australia for a short period of time on a break from his regular touring schedule.