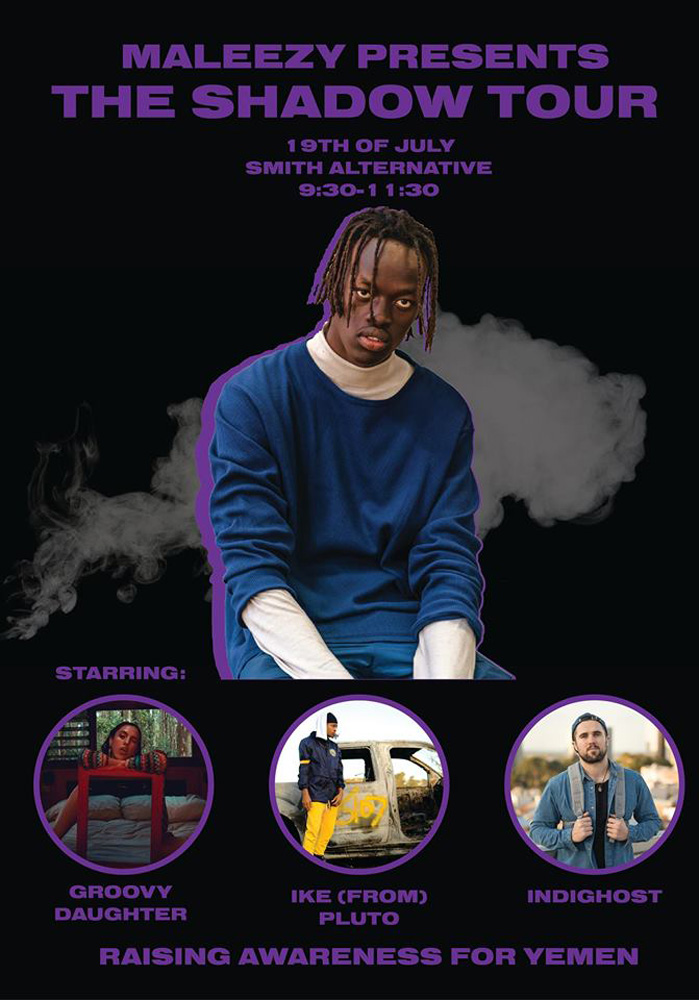 To celebrate the release of Maleezy's debut EP 'Scared Of Shadows', The Shadow Tour kicks off starring Groovy Daughter, Ike Pluto & Indighost. Spectacular performances from some of our city's best and raising funds for the crisis in Yemen.

Emerging from the trees and leaves of Canberra comes a new act. Maluil Aleer Deng – better known by his stage name Maleezy – is a young creative who first introduced himself to the world of music with his debut single ‘Win’. The momentum and buzz surrounding ‘Win’ quickly earned Maleezy a spot on Canberra’s Groovin The Moo festival line up. Since then he has been busy with the completion of his debut EP ‘SCARED OF SHADOWS’ scheduled to drop on the 12th of July.

SCARED OF SHADOWS is a cohesive narrative of thought provoking statements that reflect the issues and struggles faced by South Sudanese/ Black communities in Australia. The EP is a time capsule documenting the impacts that corporate media has when pushing an Apex/African gangs rhetoric on African communities.

“As a rapper, producer, sound engineer and director, I had full control of all aspects of this project. My goal was to share perspectives on this issue that aren’t often heard and hopefully creating awareness and dialogue” – Maleezy

To celebrate the release of Maleezy's debut EP, ‘The Shadow Tour’ will kick off at Smith’s starring Groovy Daughter, Ike Pluto and Indighost. This will be a remarkable night, filled with spectacular performances from some of our cities best acts.
But more importantly, this will a night for Yemen. Yemen is facing the worst humanitarian crisis. Close to 80% of the population (20 million people) are hungry and 10 million of these people are facing famine. You can read more here. The show is $10 entry and on the night there will be a donation box, so please if you can bring money and support a good cause.