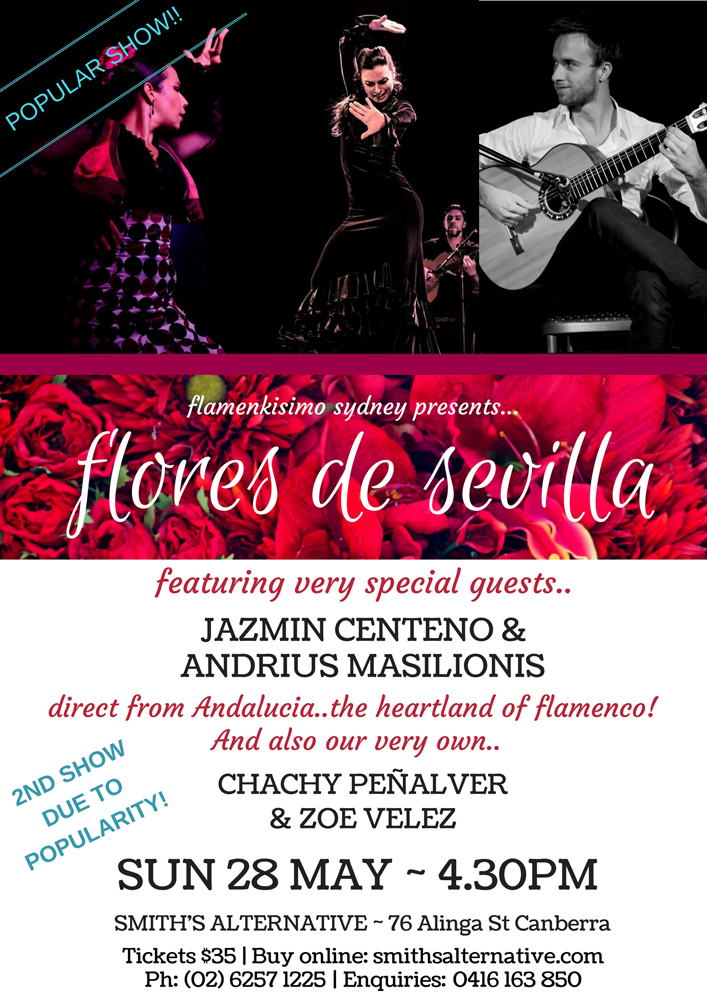 Flores de Sevilla (flowers of Seville) will pay homage to the more ecstatic and colourful side of flamenco – so illustrative of Andalucía. Just as an array of vivid floral hues adorn the streets of Seville, our artists will adorn the stage with a wild and colourful tribute to the flamenco of this flamenco city.

Over the past 5 years, Jazmín Centeno and Andrius Masilionis have been working professionally in the tablaos (cabarets) and flamenco venues of Sevile. They’ve travelled internationally as invited guests to perform and teach in Europe, South America and Asia. Their craft is finely honed and their connection on stage is inspiring to watch.

Chachy Peñalver will also bring her superb flamenco artistry to ‘Flores de Sevilla’ and is set to delight us with her extraordinary arte, once again. Accompanied by the cante of Zoe Velez and captivating cajon of Byron Mark – this show will certainly be one to remember!

JAZMIN CENTENO is a flamenco dancer, choreographer and teacher at the top of her game who  frequently dances in the tablaos and flamenco venues of Sevilla. Jazmin has been dancing professionally in Sevilla for 5 years. She was a soloist with Jose Galvan’s ‘Bailando a Camaron’ (Sevilla and Tomares) and worked closely with Eva Yerbabuena to present her individual piece ‘Y Despues’  for the Certamen Competition (Barcelona). In Argentina, she’s been a soloist in numerous theatres and tablaos and she’s been invited to perform and teach internationally in Portugal, Germany, Lithuania, Russia and China.

Jazmin brings to us a wealth of teaching and choreographic knowledge which she’s delighted to be sharing with you.

ANDRIUS MASILIONIS is a virtuosic flamenco guitarist who has lived and played in Sevilla’s top tablaos and flamenco venues, over the past 7 years. Andrius is a flamenco guitarist, composer and recording artist. He studied for years at the ‘Fundacion Christina Heeren’ with the esteemed Pedro Sierra, Nino de Pura, Paco Cortes and Eduardo Rebollar. In 2016 he graduated with honours from academy ‘Rafael Orozco’ – Cordoba. He’s worked on many international projects and has recorded albums: ‘Dama de Noche’ and ‘Confero de Musica’. Also prolific in Baroque, Renaissance and Jazz guitar, Andrius is a strong accompanist and soloist.

“…the effect was electrifying, like holes being punched in the music and then filled with a dazzling flourish.” SMH on Chachy Peñalver

“I recommend this show to anyone who wants to experience the joy of flamenco. You will be delighted by this talented group.” - Sydney Arts Guide on Flamenkisimo

“….featuring the passionate vocals of Zoe Velez…was so adept at this, and in fact, her zest and charisma added greatly to the authenticity of the evening. “ Dance Magazine on Zoe Velez.