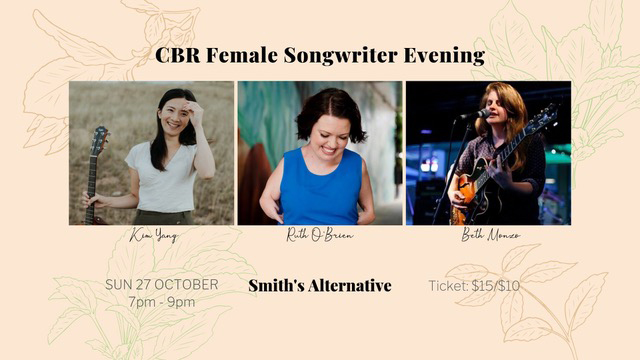 Join Kim Yang, Ruth O'Brien and Beth Monzo for a lovely evening of story-telling and collaboration to celebrate female musicians in Canberra.

According to the recent study by Sophie Chapman (Podcast 'How Musicians Work' host), only 16% of Canberran original performing musicians were female. At this show you will see 100% female original artists play just for you.

ACT #1 Kim Yang
Inspired by female vocalists like Kina Grannis, First Aid Kit, and Eva Cassidy, Taiwanese-Australian singer-songwriter Kim Yang’s soothing guitar fingerpicking and ethereal vocals are spellbinding. Her songs speak from her experiences as a partner, a daughter, a traveller and an insecure soulmate. Driven by a desire to share her stories with the world, Kim picked up a ukulele and started writing songs in 2017. She stepped out of her bedroom and into the streets, markets and cafes of Canberra. Most recently, Kim finished her debut EP ‘Ocean of Mind' Tour followed by Muddy Wolfe’s 'Victoria and Back' Tour in September 2019. She played her first festival gig at the 2019 National Folk Festival.

ACT #2 Ruth O’Brien
Ruth O’Brien is a vocal artist with interests in electronic looping, jazz, blues and improvisation. Ruth has been involved in the Canberra music scene for over 10 years. Having graduated from the CIT in 2013 with a Diploma in Music Performance, Ruth released her debut EP ‘Invaluable’ in September 2018.  Ruth has performed at a range of Canberra events including The Multicultural Fringe Festival, Floriade, The You Are Here festival, Art Not Apart and the Australian of the Year Awards Concert (2016). Outside of performing and writing, Ruth runs Mary Violet Creative and is a passionate advocate for the arts and people pursuing their creative passions.

ACT #3 Beth Monzo
Beth Monzo is an avid performer for the last decade appearing in outfits such as Dub Dub Goose, Big Score, Beth 'n' Ben and current pop rock project Betty Alto. Beth has also been appearing as a solo guitarist/singer/songwriter in this time, refining a unique interpretation of the cheeky and heartfelt. Some of her notable supports include slots opening for INXS and Chris Isaac and in 2015 her original song was shortlisted for the UC Vision Song Contest.